Have a great article of interest to gay outdoorzy guys? If so, it could be featured here. Contact Us
Listing 1 - 15

GO member Cason Crane is climbing his last seven summits: Denali. He has only one more of the Seven Summits [world's tallest mountains] to climb as he raises money and awareness for gay youth suicide prevention. Did we mention he is only 20 years old!

"It was intimidating to all of us since it was such a vertical climb, something most members hadn't expected and had never done." Even Hawse, the guide, was surprised. They wore crampons, and used ropes and ice axes to slowly work their way up. At the top - 20,305 feet - they waved the rainbow flag, left a strand of prayer flags, read a poem written by a mountain porter that will now be published as part of the International Year of the Mountain Celebration, and became the first gay team to reach Island Peak in Nepal!

Gay Outdoors climbers Rob Jagnow, Jonny Rosenfield, and Bruce successfully stood on top of Aconcagua in the Argentina/Chile border on January 24, 2005 and became the first all-gay team to successfully ascend the enormous 22,840-foot peak in the Argentinean Andes.

Lording over the surrounding Greater Yellowstone Ecosystem at 13,770 feet (4,197 meters), the elegant Grand Teton demands to be summited. Lucky there are countless routes up the iconic peak for climbers of all abilities.

I've decided to try ice canyoning, which I'm told is descending down the ice formations of a frozen waterfall. Sounds like a blast, let's do it. 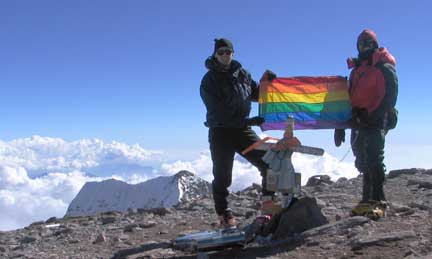 Out Of The Closet And Into The Outdoors

Adventure societies for gays are sprouting up across the United States and Canada.

Outside Las Vegas, a Game of Skill

In the depths of a desert canyon, below a massive wall of streaked, multihued stone, Amanda Wicks reached up to touch the gritty rock face. The climbing rope at her waist, a pink cord of knotted nylon, pulled tight as Ms. Wicks stepped forward to start the ascent.

Everyone worked like clockwork in the morning, and we were ready to depart from Pinkam notch at 6:39. Our plan was to head up to the ravines, and see if there was anything safe enough to climb.

Looking to learn mountaineering skills so you can climb Mt. Rainier, Denali or Everest? These companies are highly recommended.

When nine gay outdoor enthusiasts head out on a two-day mountaineering clinic, the rules are simple: hike mountains in blizzard conditions (yea, right), climb vertical frozen waterfalls with ice tools (of course), and no talk about real life until the end (climb on!)

(MENDOZA, Argentina - January 28) Hello out there. This is Mike Boisvert reporting for the Gay Outdoors Aconcagua Expedition, writing from Mendoza, Argentina. Rob Jagnow, Jonny Rosenfield, and Bruce reached the summit of Aconcagua at 22,840 feet on January 24!

(MENDOZA, Argentina ---January 9) Yes, folks, the GO Aconcagua Expedition is ready to roll. Jeff Weekley, Rob Jagnow, Jonny Rosenfield, Mark Street, Bruce Galipeau and Mike Boisvert are now in Mendoza, Argentina. Today we visited the grocery stores and mountain gear shops, to make sure we have plenty of food and supplies for our expedition.

(Campton, NH---12/5/04) Six hearty souls from GayOutdoors.org are readying to scale Argentina's Mt. Aconcagua. At an elevation of 22,840 feet, it is the highest mountain in North, Central and South Americas; and the highest outside of the Himalayas.

Gay Outdoors (GO), an international organization, has a full team ready to break the gay mountaineering record. At 22,840-ft., Argentina’s Mt. Aconcagua is the tallest mountain in the world outside Asia. Our team members all come from the Northeast and California: Rob Jagnow, Jeffrey Weekly, Cathy Savino, Arthur Pugsley, Steven Zazzera, Jay Almer, Carol Frederickson and Expedition Leader, Mike Boisvert. We are looking for a Base Camp Manager to guard our gear and maintain radio communications when we climb higher. This is a unique opportunity to be part of a major gay expedition. We are still taking applicants for the climb because most likely one of these team members may drop out as we get closer to the climb.

The 2005 Gay Outdoors (GO) Aconcagua Expedition is sparking a debate in the mainstream mountaineering community. What does someone's sexual orientation have to do with climbing anyway?