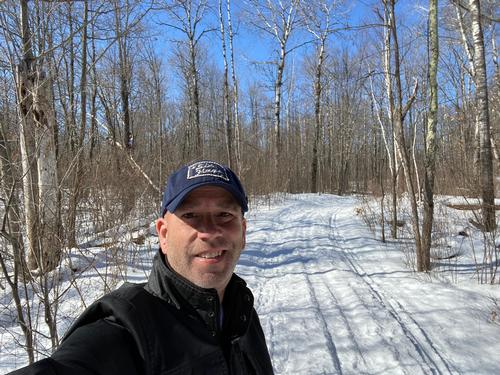 The Minnesota Hiking facebook page has had a ton of people posting these beautiful pictures of the waterfall that is iced over. So, it was only a quick 90 minute ride north to this State Park (passing a couple of other parks along the way) to get to this State Park nex to the Kettle River that empties into the St. Croix River farther south.

It always seems to be a crap shoot to search for the hiking club trails in for the winter season, however, with the Avenza Maps app and AllTrails app on my iPhone, I was able to navigate my way to a few paths that you can tell were groomed for cross-country skiers.

Once I made it back to the Quarry Loop Trail, I was amazed at how peaceful my hike was. Only passing two other people through-out my adventure, but I was just amazed at how serene this area was. I didn't know any of the history of this area until I came across a few plaques that highlighted the area.

The railroad industry discovered the Banning Quarry. Banning was a boom-town. In 1896, an individual by the name of Martin Ring platted a village along the St. Paul and Duluth Railroad. To honor the industry, Ring named the village and streets after railroad officials.

At its peak, Banning had a population of about 300, and was home to several businesses. Modern construction of steel and concrete soon replaced stone, and by 1905 quarry operations ceased.

Banning's population dwindled until its final abandonment around 1918.

Removing the Stone. In the early days of this quarry, drilling was done by hand. The derrick cranes and sawmill were powered by mules. Later technology allowed the use of steam, compressed air and electricity for power tools and equipment. Drilled holes were charged with slow-acting black powder, put on fuses to ignite simultaneously and plugged so the force of the explosion went down into the stone. The explosion cracked off a neat slab of sandstone.

A stationary derrick crane could move stones anywhere within its radius. The 80 foot tall mast was supported by cables that were anchored into the rock. Each derrick had 20-40 horse power electric hoist engine, lifting up to 8,000 pounds.

In one of my pictures, you can see the remnants of a powder house. This was one of two storage buildings for explosives, called powder houses or magazines. Slow acting black powder was used most for quarrying. Powder explosions could be controlled to split large slabs of rock, whereas dynamite was used to shatter sandstone for the crusher.

Walking along the path, and through the quarry, was so pretty. Seeing the ice from all the melting snow form in many areas. A few spots I could see potholes (which I found/learned at Interstate State Park) that were from glaciers melting and the water swirling with rock, sand, and debris cutting through the rock. I was also amazed to see how some paths were directly underneath open rock....I was nervous a few times hoping a slab wouldn't come crushing down on me.

The old building housed steam generators, an air compressor, electric generator and other equipment. In the early days of the quarry, work was done by hand. Later use of power tools greatly increased efficiency. The drills, crusher, elevator and sawmill were powered by compressed air. Electricity powered hoists for the derrick cranes.

Most quarrying equipment at the time could use either steam or compressed air. Air was considered superior because it was safer and could be sent far from the compressor without losing power as it cooled. In the early 1900s, the quarry ran out of high quality stone and turned to manufacturing crushed stone to stay in business. Rocks were dumped down from the railroad track to be loaded by hand into the crusher. A bucket conveyor carried the stones from under the crusher to the sorting screen and bins, built high above concrete walls. Once screened and sorted by size into storage bins, the stone could be emptied into a rail car waiting below.

I didn't make it all the way back to the huge Falls (that I saw people post online) as the path I was on ended right on the water, and with the melting snow & ice, I didn't want to chance breaking through the ice and get wet. There is suppose to be an ice cave even further down the path where bats hang out....I may have to come back and check the area out more during nicer & warmer weather.

There are 21 photos in Album (Note: Move mouse pointer over larger pic and click on NEXT for better viewing)