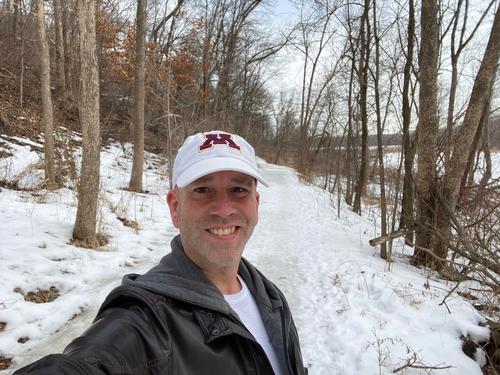 Zug-zug kind of told me in which direction his wife ran off, so I went searching for her and see what the matter was.

Living in the Minneapolis/St. Paul area for nearly 25 years, this was my first time walking in this area, and it did not disappoint. It was such a great walk around several lakes and ponds along the Mississippi River, and it was pretty close to the Fort Snelling State Park I have visited a few other times.

It did take me a while to figure out where the parking lot was, but once I found it, some guy came up to my vehicle (guess it was a hook-up??) but once he realized I wasn't interested, or was who he was waiting on, he quickly moved away.

I followed the trail along the bluff and even though I didn't know where I was going, I was glad that I kind of back-tracked and followed this less worn path as I came across a 'hidden waterfall' full of ice, a cave, a Bald Eagle nesting, several trees that beavers were gnawing at, a cool look into tree roots that get washed out from rising waters, and finally running into Zarah with a make-shift TP.

It's no wonder Zug-zug had her leave because she kept nagging the whole time, and even she gave me the cold shoulder after a while, so I continued my 4 mile hike and gave directions to an older couple who were looking for Zarah with their grandchild. I would love to come back down to this area during the summer and enjoy what the summer has to offer to this beautiful, quiet area.