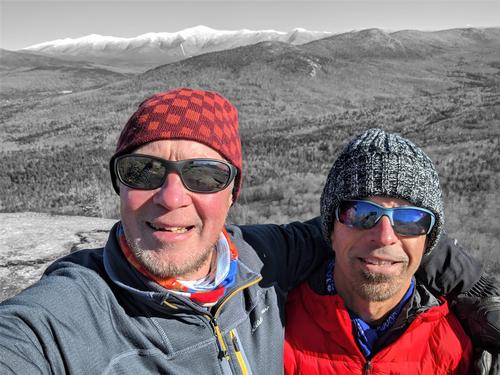 We hadn't been on these peaks in a while and forgot how nice they are. For those looking for a three hour leisurely hike with an extended period for lunch on a sunny slab, we highly recommend it!

Burned to bare rock over a century ago the Middle ‘Sugar’ is still bald as an egg on top. Lots of ledgy goodness at both peaks with spectacular views of the snowcapped Presidentials today! Views included the Zealand Ammonoosuc River valleys, and nearby peaks such as Tom, Hale and North Twin.

With the number of cars parked along Zealand Road, we expected the trail to be packed, but it wasn't. Still a well-traveled trail. Just about all of the leaves are down but this trail gets so much use they are already being ground down and shuffled aside.

LOTS of costumed hikers were on their way down as we headed up, but there were still about a dozen of folks enjoying the sunny slabs on middle sugar.

Did Middle Sugarloaf first, which has a very large ledge area with great views. Then went back and over to North Sugarloaf - not as big of a viewing area, but we had the summit to ourselves.

Many nice folks out on the trail today. We took a quick drive to the Mt. Washington Hotel to get some pics of the hotel and the snow capped Presidentials together.

Hope you had a great weekend and enjoyed your extra hour. Stay safe and remember to get out and VOTE on Tuesday if you haven't yet.

There are 94 photos in Album (Note: Move mouse pointer over larger pic and click on NEXT for better viewing)

Very nice. I'm surprised at the lack of snow at the lower levels. Had 4" here Friday in Plainville, MA.