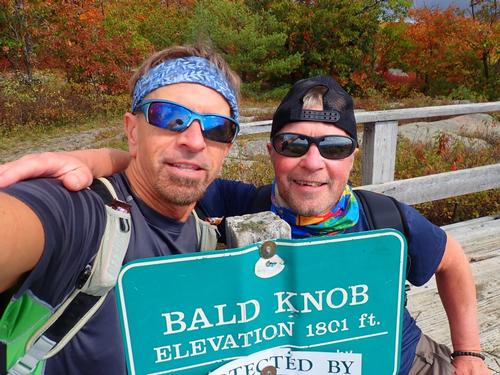 Foliage seems to be at peak. The views were spectacular and it was a nice clear day with puffy clouds!

Bald Knob is a ledge on the side of Turtleback Mountain, in the Ossipee Range.

Jon and I original intent was to hike up to Mt. Shaw via the Mt. Shaw Trail off route 171 without a trail sign. We saw cars parked alongside of the road and off we went. As we started we saw a knobby peak to the left which was Bald Knob but we were headed to Mt. Shaw. After about 5 minutes it became clear to us that we were on some other unmaintained trail we had never heard of that appeared to be heading to Bald Knob. We ran to a bunch of people who were heading down that confirmed our suspicions and they found this trail using the All Trails App. We were up for an adventure to explore a trail we had never been on!

The trail was blazed blue but it got steep and rocky. It’s the quickest way up to Bald Knob at .09 miles. Near the summit, we reached some ledges with a vista to the southwest encompassing the area surrounding Lake Winnipesauke. On the summit there is a wooden viewing platform on top, but it is not needed to obtain the gorgeous view. Lake Winnipesaukee across a large portion of the landscape, with the Belknap Range in the background. To the right, on a small hill nearby, we could see Castle in the Clouds. Red Hill is also seen, Mt. Moosilauke and other peaks further north. The views were spectacular and it was a nice clear day with puffy clouds. There was nice breeze. View of the fall foliage were better than in the White Mountains!

It was quite a busy summit and after a snack we had extra time so we continued on to Turtleback Mountain. We took the Bald Knob Trail which is an old carriage road which is beautiful - it's somewhat cut out of the side of the hill and features nice lake views.  We then reached the Turtleback Mountain Trail is also an old carriage road. Like the Bald Knob Trail, it's in decent shape and is gradual. After a series of switchbacks, the trail meets the Turtleback Summit Trail, also an old carriage road. Unlike the others, this one resembles more of a path. The views from the summit were excellent - Mt. Roberts, Faraway Mountain, Mount Shaw, and the fake Black Snout were all easily seen, as well as some points to the southeast!

Some chainsaw work could also reveal some nice lake views, but there are gorgeous views available nearby at Bald Knob. The rocky summit also features the remnants of a removed observation tower. We had lunch here, soaked in the rays of the warm sun and enjoyed more fall foliage views. There were not many people on this summit and we had it ourselves most of the time.

Total for the hike is 5 miles round trip. Just another gem in NH to climb if you are looking for a quick hike in the Lakes Region!

We finished the day enjoying the fall foliage from our house, drinking wine beside our first fire of the season and enjoying each other’s company!

There are 68 photos in Album (Note: Move mouse pointer over larger pic and click on NEXT for better viewing)