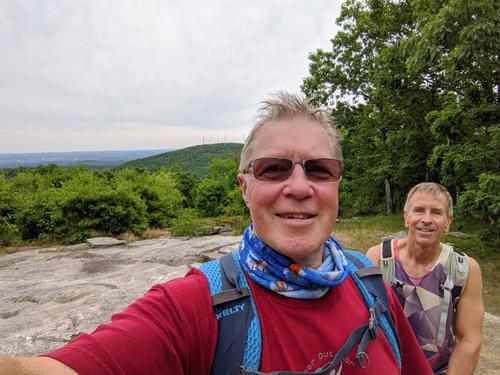 From Manchester, a couple of small mountains that look like mirror images of each other [with the exception of multiple radio towers planted on the southern peak], always come into view. They are the north peak and south peak of the same mountain. Uncanoonuc, a Native American term named for women’s breasts, was given to those two mountains because of the how symmetrical they are to each other. These mountains have a decent trail network over each peak as well as a little history associated with it.

The southern peak, which has "probably the finest forest of communication towers in New Hampshire", as the AMC Southern New Hampshire Trail Guide puts it, used to actually have a trolley that ascended its northeastern slope. This railway has since been removed and is now a trail. There is a viewpoint to the Boston Skyline 51 miles away, although this can only be observed on a very clear day. There is also an auto road that does up to the top and open to the public. This summit is 1.321 feet.

The northern peak has history as well. It's the first hike Jon and I did together...in the winter...with snowshoes...almost 20 year ago! It remains less touched by man-made structures. The summit sits at 1,324 feet.

On Saturday we set out for the summit of North Uncanoonuc Mountain. We decided to ascend the White Dot Trail. The trailhead for the White Dot Trail was fairly easy to find. This trail ascends 700 feet in just 0.6 miles, so it was pretty steep the whole way up. The trail head parking was just off the side of Mountain Road in Goffstown, across from the trailhead.

The White Dot Trail is marked with a trail sign, however, it is hung quite a few feet from the road in the woods, so it is not viewable from the roadside. The trail was blazed with white painted tin can tops, nailed to the trees. They were certainly easy to follow and visible for a great distance in the woods.

We found the trail to be steep. It started with a mixture of rocky sections and root exposed sections. Very soon after emerging into the woods, some very nice rock caves were on the left. They were certainly large enough for someone to spend the night in. You could build up on side of the cave with rocks it more of an enclosed shelter.

The trail continued on relentlessly with its steepness. We met a number of people descending on the ascent. The trail didn't do much turning or meandering through the hemlock filled forest. Near the top, at about 1,200 feet, the trail did start to level off a bit. The view behind us opened up to the north at a couple of points. We could see all the way to Kearsarge South and the Lakes Region Mountains. An eastern view opened up to the Pawtuckaway Mountains and slight peek below into Goffstown.

The summit was pretty wide and flat. There was an impressive view over to Manchester where we sat on a ledge for a break. We were the only ones when we first arrived and then a few minutes four other people arrived.

We could also see South Uncanoonuc Mountain peak. It was as we expected it to look, a huge forest of radio towers and antennas. Not the nicest view...but a view nonetheless.

After the break we explored the summit for a bit. We were in search of the Mount Monadnock view!

The slope down the southern slide was not steep at all. It was fairly flat. We continued down the path and the Red Dot Trail exited to the left and we kept going on the Blue Trail. Soon, both North and South Pack Monadnock’s came into view on the skyline. This was followed with Mount Monadnock a bit later. It wasn't the most wide open view, but nice regardless.

After snapping a shot of Mount Monadnock, returned back down the White Dot Trail.

The impressive views of Manchester makes the effort worthwhile. We were able to explore some forest, got a little exercise, enjoyed each other's company, and the view to Mount Monadnock wasn't that bad either.

A fantastic hike up an urban mountain on a hot, hazy, humid day with the threat of thunderstorms later in the day.

There are 17 photos in Album (Note: Move mouse pointer over larger pic and click on NEXT for better viewing)