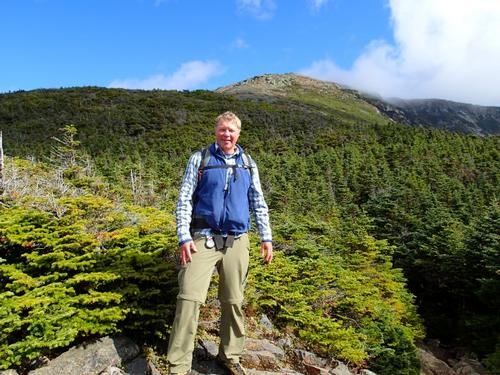 Lafayette and I have stories -there is a bond between us.  So I decided to climb it as my 60th birthday hike.

I hope I'm not overworking this comparison/reminiscent theme but I'm having fun with it.  Most of my life has been spent climbing Lafayette and the Franconia Range almost every year - It does have some hold on me.  In my 20s and coming out of the closet, a few of my gay buddies would drive up and hike the ridge. We had so much energy that afterwards we would meet at the Manchester gay dance club, and dance the night away until the bar closed!

For this trip, the bit of rain the day before made the waterfalls simply magical. I could tell I was walking into a fog the higher I climbed and hoping that I would experience one of those wonderful undercasts. Soon the trail reached the ridge and I found myself on top of Mt. Haystack.

The ridge was enclosed in fog but I was able to capture some great foliage shots at the start. I went over Mt. Lincoln without getting any views. As I descended the wind picked up and I was able to get a good shot of everyone on the summit of Truman Peak, a lesser peak between Mts Lincoln and Lafayette.

I then reached Mt. Lafayette and with the wind, everyone at the summit was shielding themselves behind a rock to have lunch. The ridge, as always was very busy, which for me, reminds me of participating in some sort of hiking convention so I’m fine with it. If I wanted more solitude, I know to just come back during the week.

Mt. Lafayette and the Franconia Ridge fooled me once more because 30 minutes into my descent, the cloud cleared and it revealed itself. The ridge has done this to me before so I guess it was fitting for my birthday hike. I was surprised to find the Greenleaf Hut still open and found out it is open until Columbus Day for anyone who wants to spend the night with meals.

One of my favorite spots are the views from the open ledges on Agony Ridge and being able to look back at what I just did.

So what happens after 60? Honey, I’m just getting started!!!

There are 42 photos in Album (Note: Move mouse pointer over larger pic and click on NEXT for better viewing)