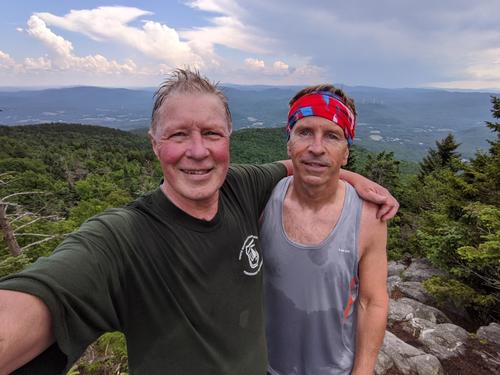 Located just outside Rumney, near Plymouth, New Hampshire, Stinson Mountain (2900′) is way off the beaten track as far as White Mountain peaks go and finding the trail head is an adventure all by itself. From Campton, we took the Ellsworth Hill Road that turned into an unpaved road and when we reached the other end of Stinson Lake, took a left onto Cross Road.

Stinson Mountain is on the New Hampshire “52 With A View” list which is a wonderful peak bagging list to work through if you enjoy climbing scenic mountains and travelling to the distant edges of the White Mountain Nation Forest, which I confess we do. Home to an old fire tower built in 1927, it remained in service until 1967, before being dismantled and removed in 1985.

Just 1.8 miles in length, we chose this hike because we were looking for something short to do after the huge thunderstorm that passed us by late morning.  While comparably “short”, the climb up Mt Stinson should not be underestimated, requiring 1400′ of elevation gain, which is a sizable gradient for a hike of this length.

The beginning of the Stinson Mountain trail is shared with an old farm road at easy grades in an area criss-crossed by old stone walls that reaches a snowmobile trail.  The snowmobile trail splits off at a sign part way up the mountain where the trail becomes more of a scramble, climbing over roots and rocks to an open ledgy summit. The snowmobile trail continues to the summit and it’s possible to hike down it back to the trail junction forming a loop, which we did on our return trip down the peak.

There were not any blazes but the hiking trail was easy to follow until just below the summit where a number of herd paths split off from the main route. While we suspect they all end up at the summit, we chose the rightmost and widest one, emerging from the forest at the rear of the summit ledges, where the fire tower pylons are visible.

The view from Mt Stinson is mostly south-facing. We enjoyed a snack sitting on the footings of the old tower for luxurious seating to enjoy the panorama!

The herd path leading right at the base of the summit ledges that leads to a western view was purposefully hidden by branches and other debris which we don’t understand why. We went over the debris to enjoy a fine view of Stinson Lake, Carr Mountain, Mount Kineo, and Mount Moosilauke.

We descended Stinson Mountain on the snowmobile trail for a bit of variety. It was muddy and moderately eroded as snowmobile trails often are, but the forest is much more open along it.  Summer has arrived in the White Mountains at last!

There are 47 photos in Album (Note: Move mouse pointer over larger pic and click on NEXT for better viewing)