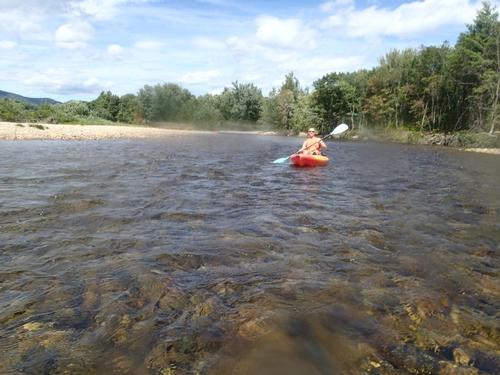 At last week's GO Gathering we saw all the people paddling past our campsite so Jon & I decided it would be fun to do the same! Being Labor Day weekend, we expected it would be crowded. We saw that the outfitter we use Ski Fanatics rents sit-on-top kayaks so we wanted to give it a try. We loved these kayaks! They were more comfortable than the regular kayaks. The bottom had drainage holes so water could not accumulate inside like other kayaks do.

Ski Fanatics provided us a shuttle to Robin's Nest and we arrived around 1pm. The put-in was insanely crazy with over 30 people trying to start at the same time. You could only laugh at the chaos! Right before I was about to put-in, the couple in front of me flipped their canoe.

Soon after starting, there was a split in the river. We were advised by Ski Fanatics to take a left. It was very shallow where we had to get out of our boats and drag them across the rocks for about 5 minutes. There were other shallow spots on the paddle, but this was by far the worst of it.

On the river itself we saw people of all ages and sizes either on tubes, kayaks or canoes. Some people towed floatable coolers, had dogs in their boats and towed people tubing with their kayaks. It was entertaining just to observe everyone on the river.

Our goal was to get ahead of the pack and have the river for ourselves. And for the most part, during the day, we did just that. We stopped at a sandbar after paddling a third of the way for some swimming and lunch. The water was a tad cold but refreshing! We were surprised how few people were swimming.

There was a section with exposed limbs sticking out of the water so one had to maneuver around them carefully. The kayaker ahead of Jon hit one of these sideways and flipped over. Most sections of the river is shallow so he was able to get back on his feet in the water and bring his kayak to shore to drain it. A bit later we pulled in at another sandbar for another swim.

Further along I got pictures of these unusual ducks with a mohawk...LOL. About the 3/4 mark, we pulled our kayaks to a smooth boulder in the river and hung out there for a bit. After this, we were at the home stretch where we paddled past the campsite we were at last week and eventually made out our to take out location at 4:30pm.

Overall, it was a relaxing day of paddling on the Pemigewasset River despite the crowd. We are sold on sit-on-top kayaks!