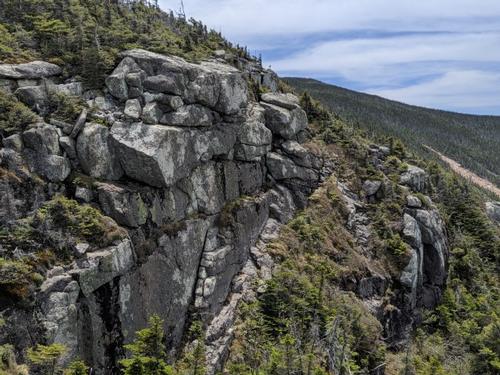 Reading the old AMC Hiking Guides, there was a herd path about 1/4 mile past the summit of Mt. Osceola that leads to Split Cliff.

The herd path diverged to the North, leading a short distance to the Split Cliff, an unusual formation with a spectacular view. It's been five years since I last visited Split Cliff. Jon has always wanted to check it out. Our goal for the day was to bushwhack to Split Cliff on the northern ridge of the mountain. I was using my memory as to when would be the best location to start the bushwhack off the ridge. I was thinking a bit before reaching the Chimney.

The Mount Osceola Trail has to be the most moderate, switchbacky trail in the Whites. It's pretty rocky for the first mile or so, but never steep. We got to the summit and continued along the trail right before reaching the Chimney. From last time, I knew that if we entered into the woods correctly, after about 50 feet of thick spruce, we would reach some open woods, leading us right to Split Cliff. The woods look pretty thick alongside the trail. We plunged into thick spruce, pushing our way through.

We headed down in the dense clusters of branches. We were not reaching the open woods that I recalled. I then realized we went too far down the trail to enter the woods. In 2014, I entered the woods too soon! Now I entered too late!!!

The terrain sloped steeply to our right.

So we then made our way left, pushing through spruce and scratching up our legs...should have worn long pants! At least we wore long sleeved shirts. My legs got fairly scratched up...lost some blood to the mountain. Jon's legs were not as badly scratched up as mine.

We made our descent. There is thick spruce around the perimeter of the cliff so it's not easy to see from a distance. We pushed through to the spruce near a drop off and peered over to find a rock formation to the west so we whacked over to get a better perspective. We found the actual Split Cliff! After about another half hour of whacking we popped out on a ledge. We missed the high point of the cliff but by that point, we were ready for lunch.

Awesome views to the north and west including the Franconia Range, Mt. Garfield, Bonds, Hancocks, Carrigain and Mt. Washington further back. This is a spectacular location! We spent a good half hour enjoying the views and having lunch.

Having found it, I knew it would much easier heading back up to main trail through these nice, open woods. Awesome! Within 10 minutes of leaving Split Cliff, we were near the main trail. After pushing through for about 50 feet we found ourselves back on the trail.

Looking at our exit point, I made a better note as to when to enter next time. There is a slight rise [bump] between Mt. Osceola and the Chimney. Just after descending the bump, that is when I should start the bushwhack.

We then hiked back up to the main summit of Mt. Osceola [scratched and bloody] for some relaxation. We hung out on the ledges for a while and then returned back to my truck. It was quite an adventure!

There are 20 photos in Album (Note: Move mouse pointer over larger pic and click on NEXT for better viewing)