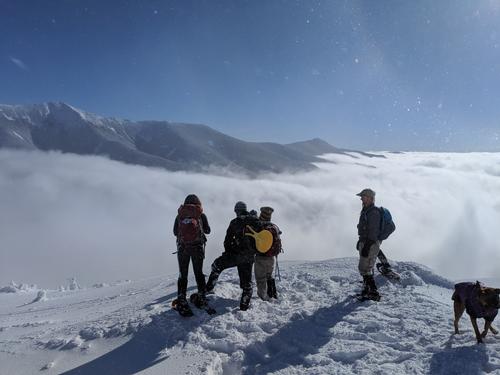 What an EPIC Day! Undercast and most snow I’ve ever seen in early December!!!

The tram was not working and the base lodge was closed. There was plenty of parking. As I arrived a saw a couple of bare booters leaving followed by someone in snowshoes. I put my snowshoes on and started around 9:15AM.  The trail was broken.

It was cloudy and the temperature was around 27 degrees. The snow was sticking on the branches. I found myself walking in a winter wonderland! The trail starts rather steep and then sort of veers right where I was doing a winding traverse.

After this traverse the trail bends a left where I continued winding steeply upward in a dense birch and conifer forest. I reached the Kinsman Glade where I saw tracks of skis from a few days ago. The trail crossed the ski glade four times where I caught up and passed the two bare booters at the 2nd crossing. After the crossings the trail stayed left of the ski glade. The snow got deeper but it was broken however some bare booters were chopping the packed trail.

I was careful not to miss the sharp, unsigned, left turn at the top of the ski glade. There was a lot of foot traffic at the intersection, some which appeared to continue forward. Thankfully when I took the left, there was nice, packed snowshoe track.

Here is where the conifers were full of snow and I found myself walking in between magical snow creatures! After 5 minutes of making the left turn, I ran into a large group who were stopped in the trail. I saw someone digging deeply into the snow. One of the members in the group said to me someone lost his crutch. Using a crutch winter hiking? I really had no idea what he meant but it appeared to be very important in order for this person to continue. I’m thinking it might be a prosthetic leg that came off in the deep snow?

I continued onward and ran into other members of this group waiting. I recall stating to one of the guys, "what happened to the sunny forecast?" After passing that large group, the trail was not broken very well but still very manageable. As I approached the outlook, I started seeing sunbeams. When I reached the outlook, I found myself above an undercast with bright sunny skies above me. This is so rare, and I savor these moments when I get them. There was another hiker there with me and we just gawked at the magnificent view! There stood a spectacular view of the Franconia Range above an undercast and distant mountains north and south. When the large group caught up, I continued my climb.

I went over East Peak and could see two people skiing down the trail. I went down about 200 feet and met them. College aged and having a blast. I then continued upward running into people with small sleds attached to their packs. I passed them and found the trail difficult to follow. I followed a set of snowshoe tracks that were following the ski tracks so I did the same. We certainly went off trail but I ended up on a ski trail before the summit station.

Lots of skiers enjoying themselves under the sunny skies! I followed the ski slope up and took a left when I reached the spur path to the summit tower. There were ski tracks but that’s it. I found myself breaking the trail in this short section. When I reached the tower, there were a lot of skiers who ditched their skis and climbing up. Fantastic 360 degree was to be had!!! I reached the summit at 11:40AM. I lingered up there for a bit.

After tagging the summit I was ready for my beer and chili at the summit restaurant. NOT!!! It was closed. I was so disappointed. I knew it would be a fast descent so I skipped lunch. I decided to take the Vista Way ski trail and the Kinsman Glade cut-off for a faster descent. The cut-off took me to where the trail took a left at the top of the ski glade that I mentioned earlier. I began to run into some people who were ascending. It’s a steep descent so I enjoyed some sections of butt sliding. What fun! I was back at my truck at 1:30PM.

I cannot begin to describe the magnificent undercast I witnessed, the warm temps, blue sky, sun, and puffy snow. Everyone I saw was so HAPPY!!!

There are 30 photos in Album (Note: Move mouse pointer over larger pic and click on NEXT for better viewing)