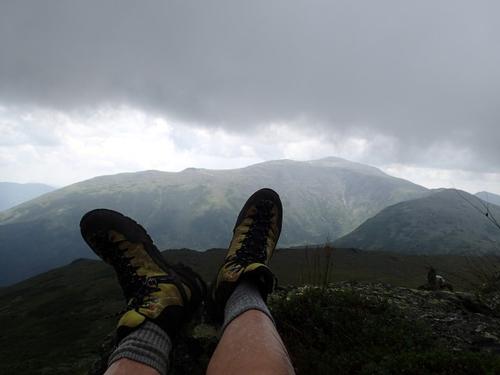 The summer is slipping by far too quickly, as usual. Last year Jon, I and another GO member climbed up Mt. Jefferson in foggy/drizzly conditions so I wanted to return to see the views.

I left the house at 8AM and made my way. I feel the need to mention the scenery of drive to the trail, because it is one of the nicest trips you can take in New Hampshire. I traveled up I-93 through Franconia Notch to NH 302 through Twin Mountain and then Bretton Woods. The scenery is enough to make a 90 year old man who's allergic to Bran mess his Depends, it's that gorgeous! And of particular note is the Mt. Washington Hotel, which is situated just off 302 in Bretton Woods. It truly is a spectacular hotel, and if you've never stopped in to take a look, you should really do so. Their website has some great photos in their Photo Album section.

To get to the trailhead, you need to take Base Rd. from Bretton Woods to the Jefferson Notch Road, which happens to be the highest State maintained road in NH. The road is pretty cool, but isn't for the weak of bladder. I got to the trail at about 9:00.

The day started out being overcast and temps were around 60 degrees.

As the White Mountain Guide professes, the beginning of the trail is a little wet, with log bridges providing some relief from the H2O. After about 100 yards the grade began, slowly at first and steepens entering into a beautiful boreal forest. I was well aware that the Caps Ridge Trail is about 2.5 miles long with about 2,700 foot elevation gain (for the math impaired, that's about 49 feet of elevation gain for every 100 feet walked, or approximately a 42 degree incline). But don't be deceived, the grade increases and eventually gets to the point where you need to do some fairly difficult ledge scrambling, but more on that later.

After 15 minutes of walking through wooded trail, the first view presented itself on a southerly whitish granite outcropping just shy of the junction of the Link Trail. The book says this is at one mile. The potholes there are an interesting sight, and with a little imagination, one even looks like a prehistoric foot print. If you look up at the trail from here, you can see the Caps for which the trail is named. Looking south, you can see some amazing ridges. The views were great and included Bretton Woods valley, Southern Presidentials, Willey Range and Twin Range.

Not long after leaving the outcropping, the trail breaks the tree line and turns mostly to granite rock-hopping. It's not too bad, but makes a point about having sturdy boots. At about 1½ miles the trail gets very steep and you arrive at the first Cap. From here the views are spectacular and I enjoyed a kaleidoscope of changing mountain views. Looking back you can see the whitish granite outcropping with the pot holes earlier on the trail. The views were expanding the higher I climbed.

I took a few snapshots and moved on to the next cap. The trail is broken and rocky, making footing tough, but only if you're a real klutz and don't look where you're going. Keep your eyes open, and you should be able to follow the blazes and make your way slowly towards the summit.

Much like the first cap, there are some great views from the second cap. There was a refreshing breeze at this point and the summit began to get obscured by clouds, but being the crazy mountaineer that I am, I kept moving. Not long after that, I reached the highest cap.

About 0.2 mile further along the trail, the Cornice Trail enters. This leads to Mt. Clay to the southeast, and also provides a diversion to the Monticello Lawn, which I’ll cover a little later. I chose to continue up towards the summit. The rest of the way up to the summit is uneventful. Some steep climbing and you're there. The summit is small (just a little rock sticking up) but offers some stunning views in all directions. From the vantage point of this summit even jaded mountaineers are sure to take home a lasting image of Mount Washington and Adams, the only parts of the visible world that rise higher than this vantage point. I had gotten to the summit in about 2 hours where I started.

I then took a scenic loop around the south side of Jefferson’s summit so I descended off the summit on Mt. Jefferson Loop, turned right on Six Husbands Trail/Gulfside Trail. This side of the summit opens striking views of Mt. Adams seen across depths of Jefferson Ravine. Within 30 minutes I found Monticello’s Lawn with alpine vegetation that spreads across a broad plateau. I climbed a bit back up the other side of the Mt. Jefferson Loop, went off trail to block the wind and ate half my sandwich. There must be almost two acres of grass, rock, mountain sandwort and large leafed goldenrod. This is definitely a worthy stop if you have the time.

I turned right on the Cornice Trail that led me back to the Caps Ridge Trail. It got sunnier as I descended and had the other half of my sandwich on the third Cap. From the Cornice Trail, it took only about an hour and 20 minutes to get back to my truck. It was a challenging 5-hour round trip to the third highest White Mountain peak! On the drive back on the Base Road, I took a quick stop to enjoy the Ammonoosuc Falls, one of the most popular swimming holes in the White Mountains.

There are 65 photos in Album (Note: Move mouse pointer over larger pic and click on NEXT for better viewing) 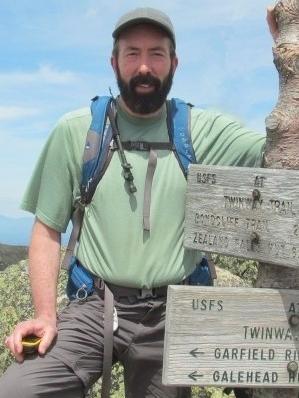 I'm bummed we missed you up there, Mike! You got the views we missed out on the summit of Jefferson...it was in the clouds for us!