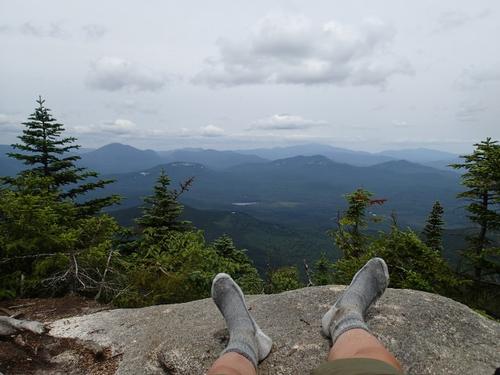 In his 1916 history of the Albany Intervale, Passaconaway in the White Mountains, Charles Edward Beals, Jr. described Mt. Passaconaway as "the loftiest, wildest, yet most symmetrical, most awe-inspiring mountain of the Sandwich Range." This peak has long been a favorite of mine, and gazing across The Bowl at it from Mt. Whiteface a month ago kindled a desire to pay another visit.

I prefer ascending Passaconaway via the less-used northern route from the Kancamagus Highway (Oliverian Brook Trail, Passaconaway Cutoff, Square Ledge Trail and Walden Trail), rather than the more popular southern approach from Wonalancet via the Dicey's Mill Trail. This 10-mile round-trip trek is in the nature of a journey, with a long gradual approach followed by an abrupt ascent of 1500 ft. in the last 1.5 mi. It has more variety than the southern approach - some brook scenery, a bit of logging history, and a wild, rugged climb up the cone - and assures that you can see all of the mountain's four varied viewpoints. Passaconaway has been called a boring peak ("Pass-a-yawn-a-way") by some hikers who have just gone up and back on Dicey's Mill Trail, missing three of the four viewpoints. Coming in from the north gives you the full flavor of this impressive mountain.

I started at the Oliverian Brook trailhead off the Kanc, a mile west of Bear Notch Rd. The Oliverian Brook Trail follows the grade of a spur line of the Conway Lumber Company's Swift River Railroad, which operated in the Albany Intervale from 1906 to 1916. At 1.1 miles, the trail is an easy grade with several nice streamside vignettes.

At 1.9 miles, the trail enters the Sandwich Range Wilderness. Ah, wilderness! Soon after I took a right on the Passaconaway Cutoff. At 2.4 miles, the trail crosses the west branch of Oliverian Brook that required some creative footwork. At 2.8 miles the trail bears right for a steady climb high above brook.

At 3.6 mi., the Cutoff meets the Square Ledge Trail. The trail crosses the base of an old slide on the steep north slope of Nanamocomuck Peak, an eastern spur of Passaconaway. I should have scrambled up it a bit for some views…next time!

Beyond the slide, the Square Ledge Trail grinds out some elevation, with rocky footing at first. Then the footbed improves. I could see the summit of Passaconaway through the trees. Next up is the upper section of the Walden Trail, a wild and rugged route with some steep, rocky climbing.

Near the top of the summit cone, the trail climbs alongside a rock face. From there it's not far to the great southern viewpoint, looking out to the lakes beyond Mt. Wonalancet, Mt. Whiteface and the lower part of the glacial valley of The Bowl. In the center is the ridge ascended by the Dicey's Mill Trail. A short, steep climb leads to a comfortable ledge at the eastern viewpoint. It's said that this outlook was cleared by the author-naturalist Frank Bolles in 1891. There was some people at the eastern viewpoint so I decided to go to the side path [no sign] first to tag the viewless, wooded summit where a small cairn was erected to mark the highest point.

Returning to the eastern viewpoint, the people were still there so I decided to take in a quick view since I planned to have lunch to the spectacular north outlook. From the eastern viewpoint, there is a fine vista of the eastern peaks of the Sandwich Range - Square Ledge (down in front), Mt. Paugus and Mt. Chocorua. Under Paugus is the wild upper valley of Oliverian Brook. The city of Portland could be spotted over the southern spur of Paugus. This outlook has a "lofty" feeling.

Just 20 yards away is the side path to the great northern outlook. Most folks skip this spot because it involves a descent of 0.25 mi. and about 175 ft. The spur path is mostly gradual, and it's well worth the extra effort on a clear day! It's a small ledge but nice for sitting, though you must stand to really see the amazing panorama. Charles Edward Beals, Jr. called this a "lofty eagle-nest of a cliff."

The view out towards Mt. Carrigain, the Hancocks, and the Franconia Range. Spruce-capped Potash Mountain is in the foreground. All told, 38 NH 4000-footers can be seen from this spot, plus two more at the other viewpoints.

When I arrived, there a guy from Dover whom I met earlier, already there. It was his first climb to Passaconaway and I told him not to miss the northern outlook. He left after 10 minutes and I ended up spending 45 minutes there all to myself!

As I exited in mid-afternoon, I enjoyed hearing the quiet cascades of Oliverian Brook once more. A neat ending to a day well-spent on Passaconaway.