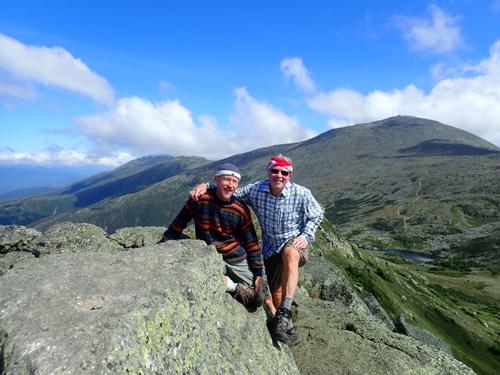 Forecast called for a sunny day with temps in the low 50's on the summit and breezy. It's as good as it gets for Mt. Washington!

The weather forecast was perfect for a hike up Mt. Washington and Mt. Monroe! As things turned out, it was a smart move. I invited Markus to join me. He replied he was out of shape and had not climbed a BIG mountain in a while but he was up for the challenge. We began the hike with cooler temperatures in the 50's and when we reached Lakes of the Cloud hut, the summit clouds were lifting.

I parked my truck at the Cog Railroad Base Station. All indications were that we'd enjoy a relatively quick hike to the Lakes of the Clouds hut, and from there, a short hop to the summit of Monroe. Then we would make the final push up the summit cone of Mt. Washington and descend down the Gulfside/Jewell trail route.

The first bit of the Ammonoosuc Ravine trail is set at fairly low grade, and despite wet rock, we made good time. We could hear the whistle and chug of the Cog train, never close enough to see, but certainly close enough to hear. Human development on Mt. Washington has been going on for more than a century, so it's not a "wild" experience. That being said, within about a half hour, the trail hewed fairly closely to the headwaters of Ammonoosuc Brook, and there were abundant waterfalls to drown out any extraneous noise. It was at once scenic and calming. There were quite a few people with their children making the climb up so we had lot's of company along the way.

But those abundant waterfalls come at a price, and that's paid in degrees. The AMC states the trail angles upward by as much as 45 degrees, and it certainly felt that way! Markus thought I signed him up for a death march...LOL. If you're going to ascend a 6,288 foot mountain, there's really only one way to do it. Further up, the exposed rock ledges were a bit slippery at times. I wouldn't say it was treacherous, but I did have to think about where I put my foot more than a few times.

I didn't feel like we were on the trail that long before we looked up and arrived at the aptly named Lakes of the Clouds hut. We were still very much on schedule, despite my penchant for stopping nearly everywhere to take pictures!

We then stood on Monroe after probably 20 minutes of steep but not that difficult hiking. Really, it's that close to the Hut! It has a false summit but in the distance we could see a group of people standing on the highest rock. We had fantastic 360 degree views! Markus said that Mount Monroe was HIS mountain based on some sort of nemerology chart using his birth date so he was happy to return.

Back at the Hut, we ate a snack and used the hut facilities. Looking around, I did not see any thru-hikers...they usually sport a beard by the time they arrive in the White Mountains. It was probably due to our timing since I suspect they left earlier in the morning to complete the northern Presidential Range traverse. With today's weather, I'm sure today will be one of the highlights of their 2100 mile long adventure!

Setting off for Washington, we basked under sunny skies. The trail above treeline was easy to follow with the cairns topped off with large quartz rock. The mountain's nickname of "the rock pile" was abundantly clear. While we didn't get slowed down much, it looked pretty amazing seeing, basically, a mountain-sized pile of rocks. Very much in stark contrast to how the other mountains in the region appear near their summits. As we continued to climb, we kept enjoying the superlative views!

The summit of Mt. Washington is the outlier. Snack shop, souvenirs, car and a railway terminus. It's a carnival atmosphere! I bought my traditional bowl of chili and we ate lunch downstairs in the hiker's pack room. Markus ate his raw veggies and could not stop eating so he continued eating when we started hiking back down the Gulfside trail. It takes fuel/food to climb up Mt. Washington.

We followed the rim of Great Gulf, with spectacular views into that hugh cirque and across to Mts. Jefferson, Adams and Madison!

We reached the trail junction of the Jewell Trail, with the hikers we met also enjoying the late afternoon views and weather. The beginning of the Jewell Trail has many rocks and boulders for rock dancing, so it's not initially a fast descent. The views of the southern Presidentials kept us occupied. Lower down, the trail was easier footing and moss glistened in the most magical way! When we reached the footbridge to cross Clay Brook, I knew we were almost back at the parking lot.

The summit atmosphere is unique but it's something that adds to the magic of the Whites! Thanks Markus for joining me!

There are 92 photos in Album (Note: Move mouse pointer over larger pic and click on NEXT for better viewing)