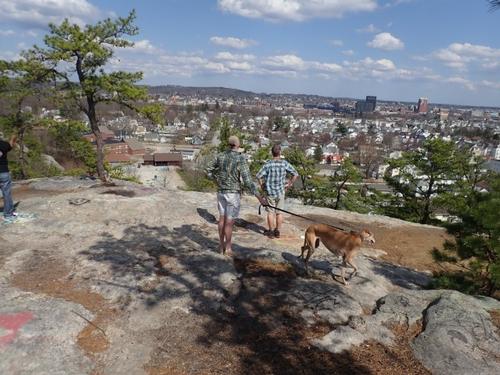 We’ve had some pretty nice weather down here in Southern New Hampshire on Saturday so after the GO North Uncanooncuc hike Mike, Jon, Rick, Rob and Soleil thought it would be a good opportunity to checkout a place to hike that is close to Jon's house. Believe it or not, it’s in the largest city in the State, Manchester. It resides on the west side of the city and goes by the name Rock Rimmon. At 150 feet high, it’s a great location to get some views of the city. It's the largest park in Manchester at almost 140 acres. Being an urban park you have to accept that you'll see some garbage and graffiti. It's a great place to hang out, catch some sun and watch the fireworks on July 4th!

There is an official trailhead on Mason Street but we took a herd path behind a school.

As soon as we entered the trail, we started heading up and came across many paths. A bit further we reached an ATV trail and took a left, keeping the ledges to the left of us as well. The trail continued up hill and over some slab terrain. It was not long, maybe ten minutes or so, before we came out to some great, open ledges.

The ledge is quite large! We had great views southwest, toward the city. Over to the northwest, we could also see the Uncanoonucs in the distance, that we hiked up earlier in the day. Rock Rimmon is popular for entry level rock climbing, which I've done here before. There were about 4 people rock climbing on the southern side. It was a great place to spend some time and visit often!

It is definitely worth checking out if you’re in the area!