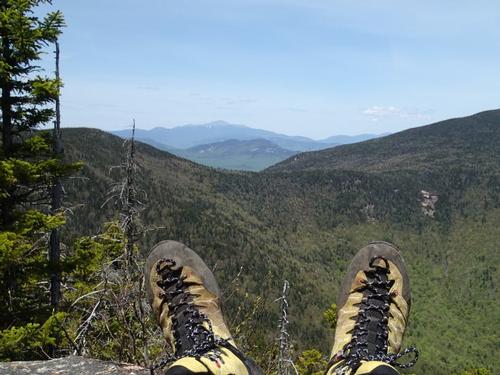 As I set off from Ferncroft, the bucolic trailhead that is the favorite of this and many other hiker, I could see Whiteface in the distance. The Dicey's Mill Trail leads through a field by a house; a sign says "Hikers Welcome." Thanks go to these property owners for allowing hikers to use their land! Shortly after entering the woods you reach the Wilderness boundary. The mosquitoes started to bother me so I put on some insect repellent and they did not bother me the rest of the day.

After climbing up the "S" curve, the trail meanders up the peaceful valley of the Wonalancet Brook. At 1.9 miles I turned left on the lightly-used Tom Wiggin Trail. the Wonalancet Outdoor Club has posted a sign at the start to discourage incidental use: "Not Recommended Steep and Loose." This trail climbs 1,450 feet in 1.1 miles.

It starts off by descending to cross the pretty Wonalancet Brook. I had to rock hop across and in the process lost my hiking stick as it started flowing down the brook! Thankfully it got hung up on a rock so I could retrieve it but I had to get one foot wet to get at it.

The Tom Wiggin trail skirts the edge of The Bowl Research Natural Area, in which the forest had reportedly never been logged. The lower part of the trail ascends through a superb mature hardwood forest. There are some very large, old sugar maples in here.

Then the trail turns up the slope as it winds through large boulders. It then climbs very steeply and contrary to reports, there is some gravelly footing but I did not find it to be slippery. Near the top, the spruce are taking over the trail so at times it felt like I was bushwhacking. It's going to take a lot of work to trim back all the spruce encroaching the trail.

At the top of the climb I turned right on Blueberry Ledge Trail, which traverses a gentle shoulder before starting the steep upper climb. I took pictures of some scrambles but missed taking photos of the two most difficult sections. After a couple of easy scrambles, I reached the first viewpoint [3600'], at the edge of a cliff looking to Sandwich Dome, the mountain in front of my house!

Just above here is one of the more difficult spots on the trail ~ a steep slab where there were once wooden steps pinned to the ledge. The saving grace on these scrambles is that the Whiteface granite generally has a good grip, unlike, say, the slabs on Flume Slide Trail. After another hand-and-foot clamber up ledges, I reached the first east-facing viewpoint, just to the right of the trail. I settled in here for lunch, admiring the classic view of Passaconaway across the glacial cirque known as The Bowl.

Farther up, after several more scrambles, is a flat ledge on the left where you look at the great south cliff, the "white face." Some historical sources say this resulted from a massive landslide in 1820. Still more scrambling brings you to the premier perch on Whiteface, a table-like crag on the right at 3900'. This viewpoint looks across the gaping cirque known as The Bowl to neighboring Mt. Passaconaway with the Presidentials and many other mountains beyond.

After another lengthy viewing sojourn, I finally continued to the south summit of Whiteface, arriving about 2:30. The southern facing view is magnificent with views of the Ossipee Range, Lake Winnipesauke, Squam Lake, and Sandwich Dome. You feel like you tower above the flat lands below from this vantage point.

I headed off on the Rollins Trail to bag the wooded, true summit to the north. In the col between the summits is the site of the former Camp Shehadi. An easy climb lead to the unremarkable summit, which is currently marked by cairn.  The butt was definitely coming into play as a useful aid for descending all the scrambles I did on the way up.

Below the Tom Wiggin Trail junction I could not help but admire the long series of rock steps built by the WODC trail crew. I caught a view as I descended the stairs. If you hike often in the Sandwich Range, consider joining this excellent trail-tending club (www.wodc.org).

I found the Blueberry Ledge Cutoff to also not be used very much given all the leaves remaining from autumn. After hiking it, I'm not a big fan but I did enjoy the tail end with gorgeous woods and an idyllic stretch right along the brook.

I saw this bridge crossing the Wonanlancet Brook to bring me back to Dicey's Mill Trail and back to my truck.

There are 41 photos in Album (Note: Move mouse pointer over larger pic and click on NEXT for better viewing)