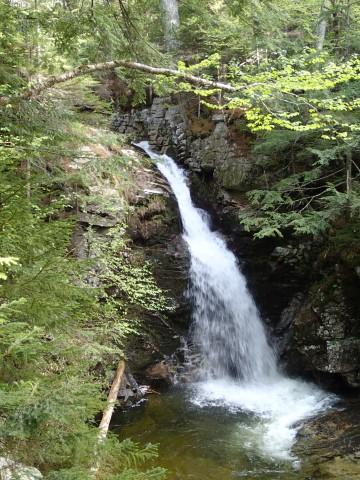 I had a few hours free and headed down to Waterville Valley to hike the Cascade Path that brought me to a beautiful series of seven cascades, falling down the rocky gorge of Cascade Brook. They are beautiful this time of year. I parked my truck at the base of the former Snow's Mountain Ski Area and also home to the Waterville Valley Ski Academy.

I started on the Cascade Path, which climbed up along a development road, past trophy homes, up an old ski trail, and into the woods.

I’ve never been a fan of following the Cascade Path once it crosses over a Nordic ski trail that traverses the rocky foothills of Snow’s Mountain. I like using the ski trails with no rocks/roots and an easy footpath. Instead, I took a left and followed the Nordic ski trail, known as Swazeytown [not signed but you'll see a Cascade Path sign on the other side of this ski trail.] I continued on Swazeytown and at a junction where a signed post as part of the Nordic trail network indicates #35, I took a right. This ski trail is known as Lower Snow's Mountain.

I continued upstream to the series of waterfalls. The main trail crosses the brook and goes up the east side, and I made it across without any problems. From here, I was treated with one waterfall after another. I don’t think there is any trail in the White Mountains that displays so many waterfalls in such a short distance! At the top, I reached a Nordic ski trail that crosses Cascade Brook on a bridge. On the bridge, I saw another cascade further up in the brook so I did a short bushwhack to view it better.

I then crossed the bridge and descended the other side of the cascades using the Westside Path for a different perspective. I followed Cascade Path back to my truck. Near the end, descending the lower part of Cascade Path, I got good view of Sandwich Dome and Jennings Peak. The total loop was about 3.4 miles with 700 ft. of elevation gain - very enjoyable!