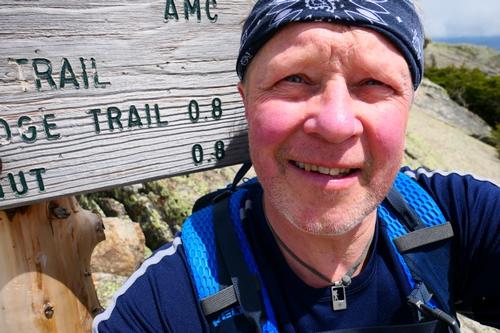 The starting point for this hike was the parking lot at the end of Forest Service Road #304 (Haystack Road), about 2.5 miles in from route 3. There was nothing at all marking the road from US 3 but there is a hiker sign as you approach it.

Today I woke up with Sandwich Dome in the sun so the hike to North and South Twin was a GO! I left the house at 7:15 for a start of 8AM knowing showers would be coming in later in the day. I was having second thoughts when I found the Franconia Ridge socked in with overcast skies and no sun. I stuck with it and I’m glad I did!

The first 1.9 miles of the North Twin Trail were a breeze and perfect for a nice morning stroll through the forest. The trail goes right along the Little River, first following an old, overgrown logging road. Instead of crossing the river, I took the herd path on the left to prevent two river crossings.

I was concerned about the third crossing that can be challenging and as I got near it I saw this fit, cute guy in his 20s walking towards me telling me he could not cross.  He shared with me what he did…this was his 2nd attempt up North Twin…both times he turned back because of this water crossing. He even had his winter gaiters on that went up to his knees! I was prepared with putting my boots in the water to cross and that is exactly what I did. The water came up to below my knees. I think sometimes when you think about something for too long, fear starts taking hold.

The trail only climbs about 500 feet in that first section along the river but then climbs over 2000 feet! My feet was wet but they were drying as I walked…and my boots are Gore-Tex so they dry fast. I made good time going up. The trail does not waste any time in gaining elevation.

As I got near the magnificent outlook another cute and young guy in his 20s from Boston caught up to me so we chatted a bit. He did not know about the herd path that eliminates two water crossings and he actually fell into the water on the 2nd crossing. He had quite a day to do because he was also going to bag Galehead after South Twin and come back down the same way.

I felt much better once the trail finally broke above the tree-line and I got my first good views of the area. The sun was coming out at the outlook and the views were incredible! It looked like the clouds were breaking up. South Twin looked like it would clear shortly. This outlook is just a teaser of the views to come...I could see cloud covered Mount Washington followed by a teaser view of South Twin Mountain to the south.

I ate my lunch and took in all of the views. I was so lucky because the sun was shining and the views were amazing. The Franconia Ridge had a layer of clouds skirting the summit. The clouds overhead made for some dramatic pictures! I had all the summit to myself for about 5 minutes before another solo hiker showed up. He was section hiking the AT from Rte. 3 to Pinkham and hiked over the Franconia ridge yesterday in driving rain and wind. He spent the night at Garfield Ridge Tentsite last night and he indicated the shelter was completely full. He was heading to Guyot shelter for tonight.

I left the summit around 12:15 and made my way back. I met a couple of cute guys in their 20s from Manchester on the outlook before I made my descent. It was bright, sunny and I was in great spirits! Saw a group of about 8 college aged kids going up and another guy who was running up the mountain. I think I was the oldest guy on the mountain today...yep...the old man on the mountain...LOL.

The hike down was pretty easy and I made good time. I was back at the Little River around 3, put my boots back in the water and made the crossing once more. I flew along that last 1.9 miles of trail taking some photos of the roaring Little River, enjoying the sunshine, and checking out the wildflowers.

I got back to my truck at 4pm. When I got home around 5pm, it started to pour 5 minutes after I arrived. Phew! Just made it!!!