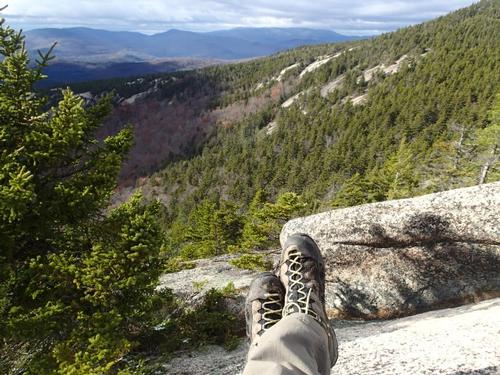 Welch, elevation 2605 feet, is a small varied peak with spectacular views. Dickey, 2734 feet, a short distance north from Welch and similarly composed of rounded rock faces and flat ledges, provides an unusual view of Franconia Notch and the mountains that border that famous pass.

I followed a brook with some small cascades in the beginning. During the ascent, I could see the cliffs of Dickey Mountain that I would be on during the descent through the trees. I met a couple of women and their two children when I took the photo. After that I was alone until reaching Welsh. Near the top of the ridge before reaching Welsh, I stepped out onto a lookoff on the barren ridge. I saw the Mad River and a ribbon of asphalt called NH 49, and the eastern valley. Across the river and highway, the great ridge is Sandwich Mountain.

More climbing and I do not see another sole in sight. The rock slabs were slippery due to recent rains so I crawled on my hands and knees on a brief demanding climb and then passed through narrow clefts.   I reached the summit to see views of Mount Moosilauke standing above adjacent mountains. Nearby was Dickey’s stone knob and scrubby trees that were hiding Franconia Notch. I stopped here for a short break and noted some snow on the trees.

Then once on Welsh, I quickly headed over to Dickey. Looking south, I could see I-93 with a view of Stinson and distant Cardigan. Snow-capped Tripyramids could be seen to the east.

Entering the woods, as I continued hiking the loop, I encountered snow on the trees once more. As I started down, I saw an outlook towards Franconia Notch. I occasionally crossed more bedrock exposed to the sky.

I then descended a rounded rock ridge bordered by trees on my right. It was an interesting walk along a drop-off over the cliffs. Below were the orange hues of autumn on the few remaining leaves from the Oak and Beech trees.

I must have done this hike at least 40 times and it’s one I never tire of doing. The views are constant once you break onto the ridge which explains why this is one of the most popular hikes in the White Mountains!

There are 30 photos in Album (Note: Move mouse pointer over larger pic and click on NEXT for better viewing)