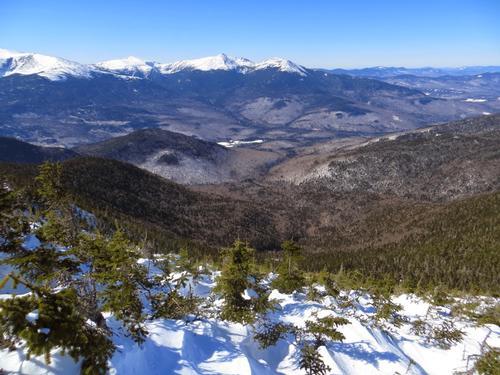 The forecast cried out for a peak: sunny, low 30s in the valleys, light winds. I like visiting the Carter Range in March, when the snow piles deep on the high, wooded ridges and lifts the snowshoer for winter-only views. Carter Dome, tallest of the range, is especially fine this time of year, when the trail along the ridge north of the summit becomes an open snow crest of deep, windpacked drifts.

The snowshoes went on as soon as I turned onto the Carter Dome Trail, which had been softly packed by several Carter Dome climbers over the weekend. Between the two brook crossings the trail passes through some nice birch glades. The grades are moderate up the side valley to Zeta Pass, with nice open woods much of the way. I caught a glimpse of the great slide on the side of Carter Dome, which fell in 1869.

At the trail sign at Zeta Pass. There was plenty of snow here. I hiked through Zeta Pass and the  Carter-Moriah Trail up to Mt. Hight had only been broken out by a couple of snowshoers - that must have been a tough climb!

The Carter Dome Trail does plenty of sidehilling as it slabs across the west slope of Mt. Hight. There were quite a few drifts through here, probably from the strong winds two days earlier. A previous snowshoer had partially busted through these either the day before my hike, or early this morning.

The Black Angel Trail sign was close to being submerged. This trail, a long route up from the isolated Wild River valley, is very seldom traveled in winter. Big windpacked drifts marked the entrance to Black Angel Trail. I went a short distance down Black Angel for a partial view towards the Wild River Wilderness.

Back on the Carter Dome/Carter-Moriah Trail, I saw an Appalachian Trail blaze was barely above the snow. Farther along, I bushwhacked eastward and down to an open patch. I placed my snowshoes gingerly through here, not wanting to plunge into a deep spruce trap. My reward was a sweeping view over the Spruce Brook valley leading out to the main valley of the Wild River - all within the Wild River Wilderness. There was a great look at the mottled snow-cones of the Baldfaces, the massive eastern spur of Mt. Hight, with the mountains of Evans Notch beyond. The temperature was comfortable, and there was no wind. A great place to hang out for a while!

I followed my tracks back up through the scrub. Back on the Carter Dome/Carter-Moriah Trail, huge drifts of windpacked snow had been piled up along the ridgecrest. I caught a view of the Presidentials from one of the trailside drifts, Mt. Adams and Mt. Madison, with the scoop of Madison Gulf between them.

Soon the trail was winding over, around and through the drifts, with great views that I frequently paused to admire. There was a view of the Pliny and Pilot Ranges, with the talus slope on Mt. Cabot prominently displayed.

The trail became an open snow ridge! A spectacular stretch on this gorgeous afternoon, and no one else around. I caught more Presy views with Big George, showing off Tuckerman and Huntington Ravines.

I reached the junction with the Rainbow Trail at south end of summit. The former southern view from Carter Dome is non-existent in summer but with deep snow a number of peaks can be seen, including the Sandwich Range, the Osceolas, Mt. Carrigain, Isolation, Moosilauke, Flume, Bondcliff, Willey, Jackson and Bond.

I headed back down the the open snow ridge with more drifts and mountains. There are some nice woods heading back down the valley on the Carter Dome Trail. The evening sun and blue sky in a birch glade, capped off a remarkable day on the Dome.