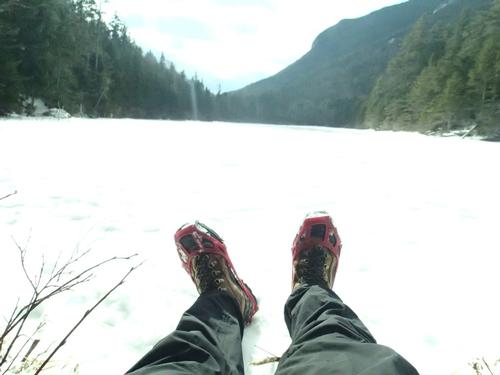 The west shoulder of Mount Kancamagus and Mount Osceola’s precipitous East Peak frame the two Greeley Ponds in a wild and mountainous setting. It is also the source of the Mad River that flows by my house and I hear it every day. When a logging railroad was planned through the notch in the 1920s, the Society for the Protection of NH Forests spearheaded a campaign to protect the area, and it was acquired by the Forest Service in 1928, with a 770-acre tract around the Greeley Ponds set aside as a permanent scenic reserve. Today the area is known as the Greeley Ponds Scenic Area.

It was mostly cloudy when I started with the temperature around 30 degrees and there was hardly any wind. There were about a dozen vehicles in the Livermore Road parking lot in Waterville Valley when I set out around 9:45AM. The cross-country ski trail network was icy and I only saw one person x-c skiing. I saw one hiker who passed me on the Greeley Ponds trail but must have turned off to use another trail because I never saw her at the ponds. At the ponds I saw a couple with their dog on the trail while I was having lunch on the Upper Pond. On the return I saw two people on a “fat bike for two” which has become really popular this winter due to the lack of snow.

The trail was a packed sidewalk, ideal for MicroSpikes. The trail is as wide as a road and at certain turns I noted boulders with downed trees behind them that blocked the former trail. The Greeley Ponds Trail now shares the Timber Camp Trail as it rises above the Mad River. This section of trail is lined by beautiful white birches. At a junction the Timber Camp Trail veers left while the Greeley Ponds Trail continues right. I could see thru the trees an unnamed peak that is to the right of Mount Kancamagus.

A few minutes later the trail began to descend rather steeply using switchbacks to cross the Mad River on the new bridge. After the crossing, the route began a steady ascent to rise above Mad River. I saw a great view of the Painted Cliff from the trees. One could never see this on the former route. Hidden behind Painted Cliff is Osceola’s East Peak.

After the ascent the route made a decent using switchbacks back to the former route that led to the ponds. The location of crossing the Mad River below the ponds has not changed and I made my way over using logs that spanned across. A small cascade was near it.

I reached the viewpoint at the SW corner of Lower Greeley, where a long view north up the pond places Mad River Notch in profile. This pond is more open and expansive than Upper Greeley, and to the right are the cliffs of Mount Kancamagus.

Returning to the main trail, I continued up to Upper Greeley Pond, an easy half-mile of gentle ascent. It was sunny so I made my way to the northern end that was in sun for lunch. After lunch, I decided to walk on the frozen pond along the left shoreline. I especially like the view up towards the top of East Osceola. If you look at the photo I took, the small slide patch that the Mt. Osceola Trail crosses high up on the mountain is on the right, directly above the prominent snowy ledge. From an opening on the SE shore there's an impressive look at the long line of cliffs fronting a northern arm of East Osceola.

There are 25 photos in Album (Note: Move mouse pointer over larger pic and click on NEXT for better viewing)