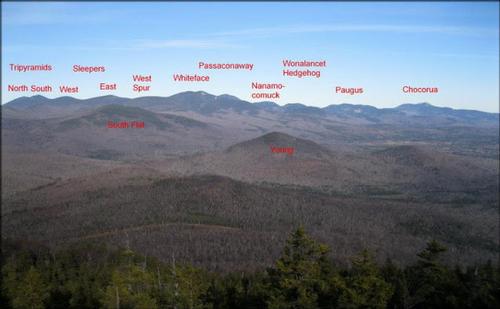 I took Monday off for the 4th of July holiday and so I decided to do a hike to Mt. Israel to explore this 2,630 ft peak located between the Sandwich Range and Squam Range. The hike round trip is 4.2 miles with 1,780 feet elevation gain.

Israel Gilman was a settler who lived in this area in the 1760s.  I find it interesting that his given-name of Israel was used to name this mountain, rather than his surname of Gilman.  It was also of interest to learn that Moses Sweetser’s guidebook of 1876 describes a trailless route to Mt. Israel which traversed pastures for first two-thirds of the ascent.  The present-day Wentworth Trail that I used for my trek doesn't traverse pastureland.  However, there are cows grazing in a pasture just a few feet from the trailhead parking lot.

And even though the present-day route to Mt. Israel doesn't traverse any pastures (as noted in Sweetser's old guidebook), some pasture walls made of stone are still visible as you hike along the lower end of the Wentworth Trail.

The wide path narrowed and zigzagged to get me up the mountain. About 1.5 miles into the hike I passed a lookoff that opens to Squam Lake and Winnipesauke. About 5 minutes later there was another view of the massive ridge of Sandwich Mountain with Black Mountain on its west end. Between Mount Israel and Sandwich Mountain lies the valley where Beebe River begins as a brook draining Black Mountain Pond and Guinea Pond.

From this viewpoint, about 5 minutes later I passed the Mead Trail on the left, a few yards lower than the rocky crest of the Mt. Israel summit. Mt. Israel provides a magnificent panoramic view of peaks in the Sandwich Range.  I have one photo with a photo which shows this vista, and the names of the peaks. Most people don’t know this but there is a faint trail past the summit leading to sunny ledges and views of Lake Winnipesauke.

To sum it up, this hike was a treat! I finally made another visit to Mt. Israel after many years.