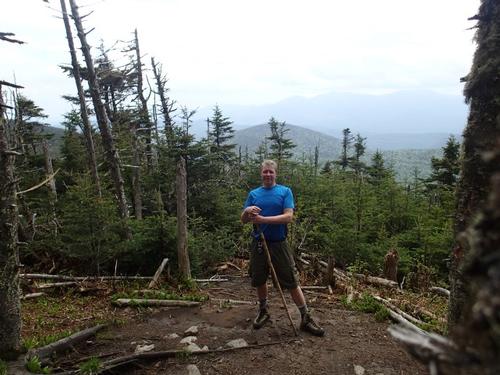 After doing trail maintenance on GayOutdoors’ adopted trail, Mt. Osceola, I wanted to do an easy hike. I chose Mt. Waumbek, one of the easiest of the 4000's, located in the Pliny Range in Northern New Hampshire.  The ride from my house was an hour, very easy, and straight up Rte. 93. Near the town of Jefferson I took a few pics of the Presidentials and Mts. Starr King & Waumbek in this field of daffodils!

I arrived at the trail head at around 9:20AM, and began preparing for the hike.  The parking lot was tiny so I had to get a bit creative with where I parked, but this was a good sign because it didn't look like the trails would be too busy.  The temperature was HOT – hot, hazy and humid.  I planned on doing an out and back, taking the Starr King Trail over the summit of Mt. Starr King, to the summit of Mt. Waumbek and back.  I began the 7.2 mile trip at 9:30AM.

The lower part of the Starr King Trail is on an old logging road which follows alongside a river for the first half mile, and is relatively easy.  I passed a cute hiker from southern NH, in his 20s with his dog Kate, on the way up. I was sweating like crazy but thankfully as I got higher, the air got cooler and I began to feel a breeze. It was interesting to see how the scenery changed so quickly on the hike up.

At first I was in a hardwood forest, then a coniferous one, and finally a very open forest with a ton of ferns.  It reminded me of a scene from Jurassic Park, and I half-expected to see a raptor emerge from the underbrush.  Moss covered nearly every rock.

The wildflowers were out, including the trout lilies and spring beauties. I continued hiking along the ridge and finally broke through some trees, reaching the summit of Mt. Starr King just before 11:30AM.  While the summit had very limited views through the trees, about one hundred feet past the summit is an open field where an old hunting camp used to exist - all that is left of it is the fireplace and chimney.  The views from here were marginal due to the haze but I felt a breeze which cooled me off on this hot day. I kept imagining how life would be if you lived up here on the mountain, with the nearest towns/homes miles away.  Must be nice!

The views from the lookout point were OK given the haze, but I could still make out the Presidential Range. It was still a decent view, one that surprises most people given the reviews I have read about Mt. Waumbek.  I spent the next fifteen minutes re-hydrating, eating my sub, and talking with the couple who I met on the summit who eventually came over to check out the view. I headed back to the summit, took a few photos, and was on my way back to my truck by 12:15PM.

Much like the hike up, the descent was very quick and relatively easy.  The trail was dry so I was in cruise control for the way down. I stopped at the top of Mt. Starr King this time with nobody around and enjoyed the view.

I made it down relatively quick. I got back to the house and had a glass of wine while enjoying the view from the deck.

Despite the heat and humidity, this was overall a great day.  While Mt. Waumbek isn't exactly the most exciting hike, the mixed scenery, building ruins, and varied terrain made it fun.

There are 40 photos in Album (Note: Move mouse pointer over larger pic and click on NEXT for better viewing)