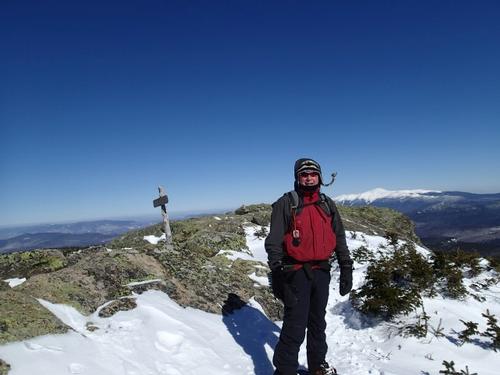 Most sane people would say, -10 degrees, tons of snow, yeah, we'll stay home by the fire today. But here I was, at the end of Little River Road getting ready to hike the Twins. I guess the heart of an adventurer still beats in me. Anyone who loves to see what’s just over the next rise or around the next corner knows what I'm talking about.

North ['4761 ft.] and South [4902 ft.] Twin are the loftiest ridge between the Presidentials and the Franconia’s. Both offer superb views of the Pemigewasset Wilderness and surrounding mountains and out to distant horizons. Total mileage in winter due to Haystack Road being closed is 13.6 miles and elevation gain of 4150 ft.

As I was driving up I saw a group of about twelve heading out. I used my snowshoes from beginning to end. A very cold start but it warmed up nicely. Temps were -10 to 20 with clear blue sky and no wind on the ascent. I crossed the Little River using the snowmobile bridge and followed the snowmobile track for a mile. Once I reached Haystack Road I had to break the trail in about 6 inches of snow as I hiked towards the official trailhead. Hmmm….where did all the people go since I saw no tracks. I then saw the well-packed bushwhack path entering Haystack Road as I approached the official start of the North Twin trailhead. Apparently I missed the bushwhack path that starts to the left after crossing the snowmobile bridge. I made sure I would take that on the return. :-)

At the trailhead I met a couple of women from the Nashua, NH area and as I took off on the trail I saw three people approach from behind me. Thanks to everyone before me who broke and packed down the trail. It looks like a Snowblower cut thru the snow! Before the first crossing I followed the packed down trail left and away from the official trail. Part of the trail goes up the middle of the river.

Throughout the day I was leapfrogging the two women I met at the trailhead and a group of three [Santa's group]. At the final crossing, I fueled up for the crux of the climb and all the other groups had the same idea so we ate and chatted a bit.

There are spots where you have to duck under the trees due to the high snowpack. I stopped once on the ‘crux’ of this climb.  A few minutes after I took my break two handsome men passed me but I caught up with them when one of them broke one of their snowshoes and was switching to MicroSpikes. I started to bonk as I got higher but I knew the outlook ledge was not very far so I kept going. A few minutes later I reached the outlook and enjoyed magnificent views all around! I could see South Twin…my ultimate destination and North Twin my closest destination. It was colder up here so I put on an additional layer as well as my neck gaiter and a thicker hat. I stopped here for lunch and eventually the two guys I had passed caught up to me. As I was leaving the other two groups I had met earlier had arrived.

I had an easy ridge-walk from here to reach the true summit of North Twin. I enjoyed the views from its open outlook. I could see the Franconia Ridge and Mt. Garfield…South Twin was getting closer. I put a fresh set of hand warmers in my mittens.

South Twin was tantalizingly close, just 1.3 miles according to a sign. I was pretty tired. It had taken me 4 hours to reach North Twin and a good deal of effort. I wound through the gumdrop trees down off North Twin. It was like a white tunnel.

I went down into a little col and then up a long gentle rise. I could start feeling the wind. I was climbing above the trees protective cover.

I could see the summit just ahead. A large group was descending as I was approaching. It was cold up on the summit of South Twin with a steady breeze so I did not linger up there for very long. I reached the summit around 1:15PM. I lucked out with beautiful views of the Presidential, Bonds, Franconia Ridge, etc. The other two groups I met earlier were up there with me.

I still had a little under 7 miles to travel before my day was done so I headed back. I made it back down the cone safely and into the snow cone forest. I was tired and I felt it on the short climb back up North Twin.

I skied on my snowshoes down the steep parts and really enjoyed the flat walk out along Little River. The other two groups passed me on the flat walk out. I then used the bushwhack route that I had missed earlier. Another great day to be out in the woods!