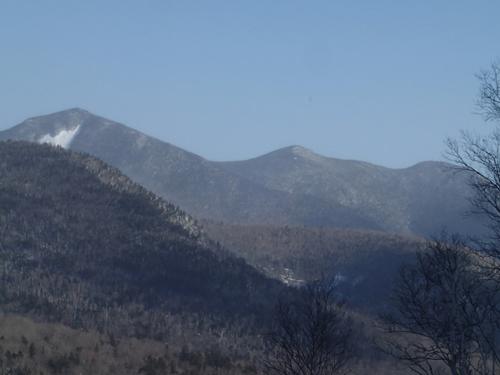 I decided after digging out from the snowstorm I’d head down to Waterville Valley for a hike up the Timber Camp Trail early afternoon, which has an interesting viewpoint looking east to the Tripyramids and Mt. Kancamagus. It was cold with a temperature of 9 degrees at the start and periodic episodes of gusty winds blowing the snow around but it was sunny. By the time I finished the temperature had dropped to 2 below zero and wind chill was 11 below! When I first started the parking lot was full with many cross-country skiers but when I returned there was only my truck along with a SUV. Pretty lonely out here for being the Presidents Holiday weekend.

Alongside the Greeley Ponds Trail, the Mad River was hardly flowing in this artic air after the snowstorm. The Greeley Ponds Trail has adopted the former route of the Timber Camp Trail due to Hurricane Irene damage. Greeley Ponds Trail turns into the former route of the Timber Camp Trail 1.4 miles from the parking area. It then follows a well-built logging road up into the valley of Greeley Brook, on the SE side of East Osceola. This basin is laced with logging roads that were put through to salvage timber after a hurricane devastated the area, perhaps in 1950. The trail climbs at easy to at most moderate grades. It was originally opened as an X-C trail and is also great for snowshoeing or summer hiking.

After 0.6 mile, the Timber Camp Trail bears left while the Greeley Ponds Trail continues forward. I was following cross-country ski tracks until I turned left on the Timber Camp Trail. From this point on, I had to break the trail with my snowshoes in over a foot of snow for 0.9 mile, to an elevation of 2400 ft, to a big open bank. By snowshoeing up to the top of the bank I gained an unusual and  dramatic look up at the Painted Cliff on a spur of East Osceola. It’s a hollowed-out scoop in the mountainside. According to Nathaniel Goodrich in his 1952 book, The Waterville Valley, his brother and friends blazed a "Nature Trail" up towards these cliffs and back down towards the Mad River. But shortly thereafter the path was obliterated by the 1938 hurricane. The closeup of the cliff was impressive!

I got an interesting view north of the Hancocks through Mad River Notch, and east to the SW ridge of Mt. Kancamagus, Flume Peak, and the Tripyramids. Tripyramid's North Slide was visible above Flume Peak. Scaur Peak is to the L. There's also a look NE to the cliffs on the western face of Mt. Kancamagus.

On one of the pictures I took I caught both the “K1” and “K2” cliffs. The "K1" Cliff is on the R, the "K2 Cliff" on the L. Around 1910 Watervillians blazed rough trails to both of these cliffs. They must have been really rough, and didn't last long.

The trail continues on for another 0.3 mile to High Camp but I was starting to get very cold and decided to turn around.

There are 12 photos in Album (Note: Move mouse pointer over larger pic and click on NEXT for better viewing)