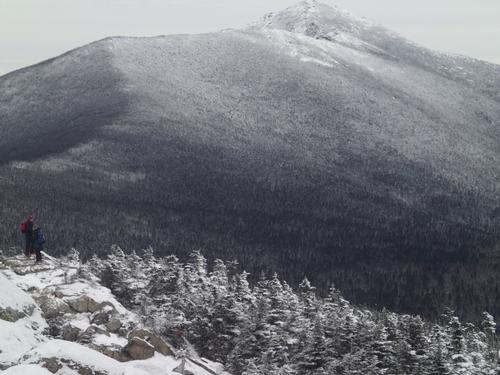 I enjoy hiking Mount Liberty and Flume as a winter dayhike since it's a fairly short drive from my house in Waterville Valley, is a good distance for days without too much daylight, and only has a short section of trail exposed to the elements.  The Liberty Springs Trail is another trail I prefer in the winter because all the small rocks, mud, and standing water is covered with snow making it much easier on the feet.   For this trip, I had MicroSpikes but no snowshoes, as there hadn't been much recent snow and the trail surfaces were pretty hard packed. I was wearing my Sorel winter insulated boots and carried ski poles.  I was on the trail by 8:30 AM, and decided to start at the Basin Parking Lot, take the bike path [in the winter it becomes a cross-country ski and snowmobile trail] and look for the herd path that provides a short cut to Liberty Springs Trail. I packed up and started out with MicroSpikes and kept them on the entire day. I could not find the herd path but found that the Basin bike path end was a shorter approach than starting in the parking area near the Flume Visitors Center. I then started up the beginning of the Liberty Springs Trail.

I noticed the trail veered north, the direction from which I travelled at the Basin so I started to think that the so called herd path would join once the trail veers east toward Mt. Liberty. Sure enough, the trail makes a hairpin turn east and there were footprints in the snow of a herd path. I made plans to use it on the return. The herd path joins Liberty Springs Trail .2 mile below the Flume Slide Trail junction so mileage and time can certainly be saved using this approach!

The first stop I took was at the trail junction with the Flume Slide Trail. There were already ice flows on the trail where crampons might have been safer. But most of the trail surface was firm so MicroSpikes was fine. After some water, I pushed on.  The woods were gorgeous today, an overcast sky but it didn't dampen my spirit at all. As I gained more elevation things got a little colder, something I’d have to keep an eye on.  After the stream crossing, the trail gets steeper as it ascends towards the Liberty Springs Tentsite.

The last half mile below the tentsite has always felt like a slog to me, it seems as if the tentsite will never come.  However, after passing it it's a short three tenths of a mile steep burst to the Franconia Ridge Trail junction. As I gained the ridge the trees became covered in snow creating a winter wonderland look.  I quickly came out of the trees. I love that feeling, of coming out on top of the world with no one else but me. I met a few people along the way, but solo winter hiking gives one a sense of being just you and the wilderness!

The Franconia Ridge trail appeared to be broken out to the north and the route up to Liberty looked in fine shape.

I reached the summit at 11:30. The clouds were just high enough that I had spectacular views from Mount Liberty's summit of the Pemigewasset Wilderness and the Bonds. The winter views were wonderful, and I shot a bunch of pictures in all directions. I had the full Pemi laid out in front of me, with views beyond to Washington.  The Franconia Ridge was clear. The summit was in the clear, and mostly free of wind.  Temperature was in the single digits so I did not linger very long on the summit.

From Mount Liberty to Flume Mountain it's a steep decent to a col before a steady uphill climb to the crags on the summit of Flume Mountain.  The Franconia Ridge Trail between the two peaks in the winter is similar to the section between Little Haystack and Liberty except it's usually broken out much better since it sees a lot of foot traffic.

I hid my pack and made good time to Flume Mountain's summit and took in the great views north into the notch and south towards Lincoln and Woodstock.  After taking a bunch of pictures I started to get cold so I booked it off the summit back into the woods.

The hike back to Mount Liberty started off fast then it became much slower as I made the final push up the steep section to the summit of Mount Liberty.

From here it was all downhill and I made great time back to the Liberty Springs Trail where I stopped for lunch. I cooled off quickly, so lunch was short and cold with no views. I descended down a rapid pace. The rest of the trip was a nice walk in the snowy woods. I ran into the three guys from Concord, NH that I kept meeting throughout the day but left them for good on the descent. I had the woods all to myself. I took the herd path back to the Basin and found it to be an enjoyable hike out. I made it back to the truck at 3:20.

It was a fun hike, one that I like doing when there is peak foliage. In the winter I like it because it's much easier on the feet, the descent is tons of fun and fast, and the summit of Mount Liberty looks like a huge scary frozen rock mass!