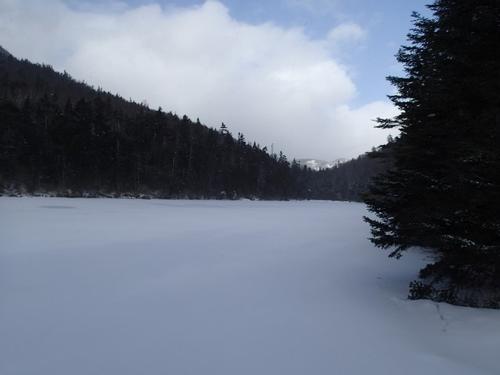 Light snow was falling when I woke up providing coating all the trees with a dusting of snow. The sun came out by the time I started the hike, the temperature was around 25 degrees and there were light winds.  Greeley Ponds Trail from Waterville Valley has been closed since Hurricane Irene in 2011 due to extensive damage and it recently opened in the fall of 2014. I had hiked this trail many times since is always has been a favorite. I was curious to see the work that had been done and the changes that were made. I was also curious to see if I could cross-country ski it since I used to frequently do this.

The west shoulder of Mount Kancamagus and Mount Osceola’s precipitous East Peak frame the two Greeley Ponds in a wild and mountainous setting. It is also the source of the Mad River that flows by my house and I hear it every day. There were about a dozen vehicles in the parking lot when I set out around 10:15AM. I saw some people cross-country skiing and I saw only one person near the ponds as I was leaving them.

The trail was a packed sidewalk, ideal for MicroSpikes. However there were lots of frozen post holes and as I got closer to the ponds the trail became narrower forcing me to try walking around them….in some cases I had no choice but to step in them. Damn!

Paper signage was noted over some of the signs on the Greeley Ponds Trail. The trail is now as wide as a road and at certain turns I noted boulders with downed trees behind them that blocked the former trail. A light coating of snow were on the confiners that was a nice reminder of how beautiful winter is!

A few minutes after this junction I saw a great view of the Painted Cliff from the trees. One could never see this on the former route. Hidden behind Painted Cliff is Osceola’s East Peak.

A few minutes later the trail began to descend rather steeply using switchbacks to cross the Mad River on the new bridge. I began to doubt even more if I would want to do this nowadays with my cross-country skis. After the crossing, the route began a steady ascent to rise above Mad River that made my final decision about skiing the route….nope. It’s really too bad because I really loved cross-country skiing this trail but hey, I’m just happy the US Forest Service did not abandon it because it’s a great trek even on foot!

After the ascent the route made a decent using switchbacks back to the former route that led to the ponds. The location of crossing the Mad River below the ponds has not changed and I made my way over. I could hear the wind howling and it began to get colder so I put on some extra layers.

I reached the viewpoint at the SW corner of Lower Greeley, where a long view north up the pond places Mad River Notch in profile. This pond is more open and expansive than Upper Greeley, and to the right are the cliffs of Mount Kancamagus. It was so windy that the snow was dancing across the pond and it was fun to watch!

Returning to the main trail, I continued up to Upper Greeley Pond, an easy half-mile of gentle ascent. The best view at Upper Pond is found along an overgrown side path on the southern end that crosses the outlet brook. Looking north down the pond, the rock-faced western spur of Mt. Huntington peers over the trees. Although I've crossed the ice on Upper Greeley many times in the past, I stayed off it today with a recent rain/thaw event in the back of my mind.

I especially like the view up towards the top of East Osceola. If you look at the photo I took, the small slide patch that the Mt. Osceola Trail crosses high up on the mountain is on the right, directly above the prominent snowy ledge. From an opening on the SE shore there's an impressive look at the long line of cliffs fronting a northern arm of East Osceola. Periodically the wind got gusty making visibility difficult. It was an easy decision to have lunch on the return away from the Mad River Notch.

I headed back and spotted a beaver lodge in the southern outlet. I did not see a beaver damn but the lodge did look like it was being maintained. It got sunnier on the return and I caught a better view of the Painted Cliff.

When a logging railroad was planned through the notch in the 1920s, the Society for the Protection of NH Forests spearheaded a campaign to protect the area, and it was acquired by the Forest Service in 1928, with a 770-acre tract around the Greeley Ponds set aside as a permanent scenic reserve. Today the area is known as the Greeley Ponds Scenic Area. Now that the trail has been reopened from Waterville Valley, I will be returning often, winter or summer!