Join me for a mostly modest hike out to two of the Catskill 3500 foot peaks...Balsam Lake (3723') and Graham Mountains (3868').  Both of these peaks are accessible from a trail junction

From the Thruway (I-87) take Exit 19 for Route 28 West and follow for 34.9 miles to the Belleayre Ski Area.  Take a left onto Route 49A (Galli Curci Road, which turns into Todd Mountain Road).  Follow Route 49A for 5.5 miles to the intersection with Dry Brook Road.  Turn left and continue for 1.4 miles, where you'll take a right onto Mill Brook Road.  The DEC trailhead will be on the right in approximately 1.5 miles.  It will be a turnout along the side of the road.  This is about an hour's drive from the Thruway.  Look for a gray Hyundai Elantra. 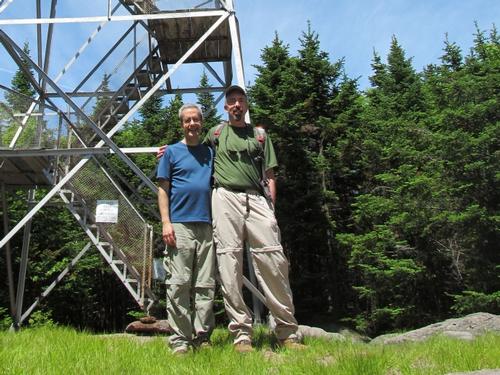 After camping the night at Little Pond Campground, I met up with Richard at the Dry Brook Ridge Trailhead on Mill Brook Road at 9:00AM (Richard had spent the night at a B&B in Margaretville).  It was going to be another beautiful day, but it was a chilly start.  The trailhead was at an elevation of 2600 feet.

We got ready and crossed the road where the trail follows an old jeep trail.  The trail climbed modestly all the way out to the trail junction for Graham Mountain.  We reached this point by 10:07AM.  The trail out to Graham was an unmaintained trail over private land.  This was a pleasant walk through the woods until about 10:30, when the trail began to climb towards the summit.  Still it was not more than a moderate grade.  There was a partial view northward along the way.  We emerged from the woods onto the summit of Graham (3868') at 11:20AM.  Here there was the remnants of an old radio tower installation.  There were limited views from the ground, but better views could be gotten from climbing up the tower's cross-beams.  Views of Slide, Doubletop and Balsam Lake Mountains were all prominent...even the firetower on Balsam Lake could be seen.  We took a break and enjoyed the sunny summit.  At roughly 11:40 we re-traced our steps back to the old jeep trail, which we reached again by 12:55PM.  The trail junction for Balsam Lake Mountain was a short distance further down the path.

Just into the trail up Balsam Lake was a gate and then the trail begins to climb modestly.  The trail climbed in steps...after a climb the trail would level out and then climb and level off again.  It was 1:30PM when we made it to the Fire Warden's Cabin and subsequently the open area with the firetower (3723').  The cabin was open, since a volunteer summit stewart was there.  It was fairly quiet on top as there was only one other couple there at the time.  Since there were trees all around the open area, you needed to climb the tower to obtain any views.  The views were spectacular from the top though.  After taking in the views, we had our lunches.  During this time more hikers, including a group of boy scouts had arrived.  After about an hour on the summit, we headed down the southside of the mountain to see a view...it wasn't all that special, but it was near a spring where we re-filled our bottles.  It had been a fairly steep descent to the spring and we had to re-climb back up to the summit before returning via the same path we had used.  We made it back to the jeep trail by 3:25PM and from there is was only about an hour back to our cars.

Afterwards, we headed back to clean up before dinner.  I got back to camp and found Rich (who I was hiking with me on Sunday) setting up his tent at the site.  We both drove back to Margaretville to meet up with Richard for dinner.  The three of us drove to Big Indian to the Peekamoose Restaurant on Route 28.  It was a nice way to end the day.

There are 38 photos in Album (Note: Move mouse pointer over larger pic and click on NEXT for better viewing)