Join me for this modest hike to West Kill Peak at an elevation of 3880 feet.  West Kill is the sixth highest peak in the Catskills.  We will meet up at the end of Spruceton Road for the 6.4

From the Northway/Thruway (I-87) it should take approximately 64 minutes (39 miles). 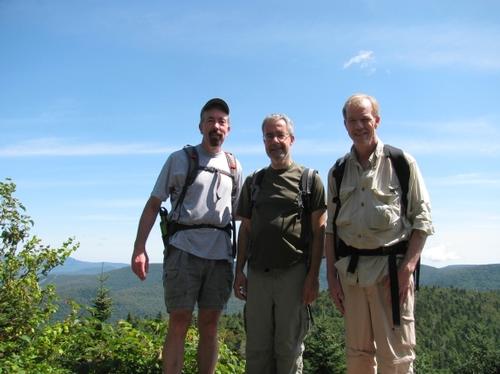 After another night camping out at the North-South Lake Campground, Richard, Michael and myself broke camp, and after re-fueling and getting a sandwich we headed to Spruceton for the hike up West Kill Peak (August 25th).  We were alittle late getting over to the trailhead...arriving at about 9:30AM.

It was another nice day out with sunny skies and after a chilly start it warmed up nicely again.  After getting ready we headed up the old carriage road up along the West Kill (creek).  This was a relatively easy grade as it followed the "kill" up to the very beautiful Diamond Notch Falls.  Luckily there was sufficient water flowing!  Some of the other brooks that I had seen in the area were either low or dry.  At the falls we took in the views and then proceeded up the Devil's Path.  The Devil's Path is known to be a difficult trail; however, this portion was much gentler.  The trail was still rocky initially and climbed fairly persistently...for about 1.5 miles.  We reached the "cave" at about 11:20AM, which marked the end of a significant portion of the climb.  This cave was just a large slab of rock situated in a way that a farily large shelter was formed...a couple people could comfortably sleep inside.  As we continued on, the grade moderated greatly...alternating between flat areas and small climbs.  It was still another mile between the cave and summit, but we made excellent time along this part of the broad summit.  We reached the Buck Ridge Lookout by noon.  There are views from ledges on both sides of the trail, providing exceptional views into the Spruceton Valley and eastward toward Hunter Mountain and the Blackhead Range (which we had done the day before).  The views certainly didn't disappoint!  As I had read, these are among the best views in the Catskills.  It was just alittle further to the summit and we reached the cairn about 10 minutes later.  As the summit was completely treed...like most summits in the Catskills...we returned to the Buck Ridge Lookout for lunch.  There was another couple here for awhile, but for the most part we had the ledge to ourselves.

After lunch we returned via the same trails we had used for the ascent.  Of course we made great time going down and we again reached the falls by 2:20PM.  There were some people here now just enjoying the falls.  We pressed on for the short return by way of the carriage road and were back to our cars by 2:45PM.

As everyone wanted to start back and kinda beat the traffic, we called it a day...and weekend!  A big thanks to Richard and Michael for joining me on this hike and for a wonderful camping/hiking weekend.  It was great to have a small group of GO'ers share the camping experience and the weather and companionship couldn't have been better.