Join me for this hike over Connecticut's highest mountain, in addition to its high point.  Bear Mountain, at an elevation of 2323 feet is the highest peak; however, the high point in the state is

From the Mass Pike Exit 1 (West Stockbridge) take Route 41 South for 23.9 miles (approximately 35 minutes).  The trailhead is on this road (also known as Undermountain Road in CT).  It will be about 9.5 miles south of the MA/CT border.  You will encounter Beaver Dam and Foot Hill Roads just prior to coming up on the trailhead.

From Salisbury, CT the trailhead will be approximately 3.4 miles along Route 41 North.  It will be just beyond Westmount Road. 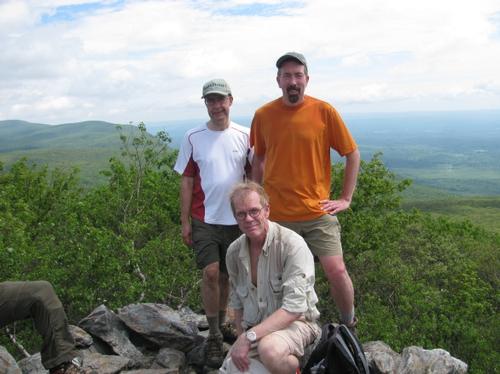 On Saturday, June 29th, I met up with Michael and Richard at the Undermountain Trailhead on Route 41 north of Salisbury.  The relatively small parking lot was already pretty full by the time I arrived...this was one of the trailheads for northern end of the AT in Connecticut.  This also happened to coincide with a "Cops On Top" charity event, when police in all 50 states climb to their state's high point.

In any case we got ready while we waited for Todd (backpackingbear).  After about 20 minutes we decided it was long enough, and we started out.  The day started out partly clouded and in the 70's and humid.  The trail was a modest grade as it climbed up to the trail junction with the AT at a point known as Riga Junction.  We turned north to follow the path up to Bear Mountain.  This was a gradual climb up to the summit with tons of mountain laurel lining the trail.  At 10:45 we had reach the first of a couple of views over to Mt. Frissell and to the south.  A short time later (11:10) we reached the carefully constructed rock pile which has been placed on the summit of Bear Mountain, without which there would be little to no view.  There was nice views here mostly to the north and east.  Mount Everett was prominent to the north and the Twin Lakes to the east.  By this time the skies were becoming less clouded with more blue sky poking through.  We rested here for about 15 minutes, during which we had the opportunity to chat more with the cops that had summitted right behind us.

We headed off the northern side of Bear Mountain.  This side was much rockier and steeper, taking about 20 minutes to descend it.  Afterwhich the trail again moderated, meandering through the woods a short distance until we reached an unmarked trail junction.  We took the trail to the west, which passed an AMC cabin on its way to the road crossing at Mt. Washington Road.  There were two parking lots here...one for Bear Mountain and the other just across the border in Massachusetts for Mt. Frissell.  We walked the short distance into Massachusetts and were back on the trail to Mt. Frissell at 12:30.  This trail heads northwest further into Massachusetts before turning back into Connecticut where we reached the base of Round Mountain.  The ascent became rocky and steep again, but we summited this minor peak by a little after 1PM.  It was time for a much needed lunch break!  We hung out on an open granite area with views of Frissell immediately in front of us.

After our lunch break we continued off the northwestern side of Round Mt. and were soon back into Massachusetts for the relatively steep climb up to the treed summit of Mt. Frissell...along the way there had been some views back to Round and Bear Mtns.  The summit of Frissell was not marked and barely discernable, except there was an obviously height of land just before the trail turned south and started to discend off of Frissell.  In a short distance the trail opened up with wonderful views to the south.  We reached the well-marked CT high point at 2:30 and took another nice break.  It was hot and alot of sun by this time.  The high point is marked by a pile of rocks as well as a post (geomarker).  There was also an ammo box secured to a nearby tree, which contained the log book.

We had discussed going a little further down the trail to the tri-state marker, but the group as a whole wanted to begin the trip back.  We returned over Frissell and Round via the same trail, which we used en-route.  At about 4PM we reached the junction with the AT again (near the base of Bear Mountain).  We turned northward along the AT for a short distance until we met up with the Paradise Lane Trail, which returned to the Undermountain Trail without re-summitting Bear Mountain.  This was a nice walk in the woods with periodic views of Bear Mountain.  At 4:55 we reached the Undermountain Trail again and began the last leg of our trip back to our cars, which we reached roughly at 5:30.

We got organized and caravaned it 5 miles to the south...to Lakeville, where we enjoyed a really nice dinner at the Black Rabbit Bar & Grille on their patio before calling it a day.

Thanks to Richard and Michael for joining me on this very beautiful day hike in northwestern Connecticut.  It was great to catch up and chat throughout the day!  It turned out to be a gorgeous day, but on the hot and humid side.  I'd definitely give this hike "two-thumbs up" for the views, too...it's not a high peak, but the set of peaks have plenty to offer!