Join me for this 36-37 mile bike ride through the Swanzey and Winchester countrysides, where we will visit six covered bridges which span the Ashuelot River.  These include the Ashuelot, Coombs,

We'll meet at the terminal parking lot for the Keene Dillant-Hopkins Airport.  This is on Airport Road off of Rt. 32, south of Keene.  Coming into Keene either from the east or west using Rt. 101, turn south at the Rt. 12 junction.  In a few miles turn onto Rt. 32 South and make a right onto Airport Road.  I've confirmed that we are permitted to use this parking lot with the airport director, but we are asked to park away from any construction that is going on and near the outer guardrail/fence...so look for me there in a grey Hyundai Elantra.  There is no fee for parking. 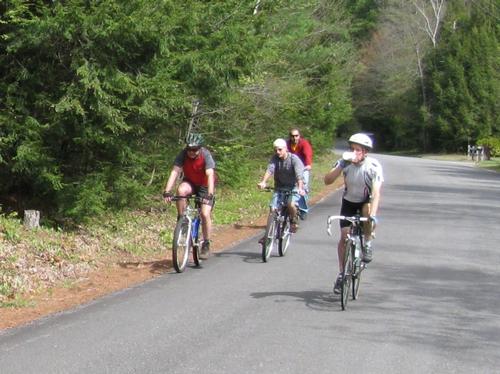 On Sunday, May 6th, five of us (myself, Johnny, Eric, Rick and Richard) met up for this ride at the terminal parking lot of the Keene Dillart-Hopkins Airport at 10AM.  The day began as mostly cloudy with a slight chill, but progressively warmed and cleared through the day.

We got ready and headed out a little after 10AM.  We left the airport and headed south on Route 32 along the airport property.  We diverted over to Whitcomb Road and soon reached the Carleton Bridge.  From here we continued southward and made it to a stretch of Class 6 road (Rabbit Hollow).  We had gone around the closed section of road, that we had walked our bikes through last time, but this section had gotten badly torn up due to recent logging operations in the area.  It was muddy and it still required us to walk our bikes through parts of it.

Back on paved secondary roads we made our way to Winchester center and just a little further southwest we reached the Ashuelot Bridge (a beautiful latticed structure).  Here we took an extended snack break...it was now about 1PM.  After the rest we were now halfway around the loop and we headed back northward along Old Westport Road.  This passed through farmland on the way to the Coombs Bridge.  After crossing the bridge we quickly reached Rt 10 and headed north for a short time before heading into Westport Village and the Slate Bridge.  The Thompson Bridge in West Swanzey was reached shortly thereafter.  As we continued northward we biked through more dense residential areas around the Eaton and Old Eaton Roads, where we ultimately crossed the final bridge of our tour...the Cresson Bridge.

Afterwards we headed back northward along Rts. 10, 101 and 12 until we finally made it back to our cars at the Airport parking lot.  It was now 3:30PM.  After resting up and stowing our bikes we headed into Keene and had a nice dinner at the Elm City Brewing Company.

It turned out to be a wonderful, fun ride with a great group of guys.  Thanks to Rick, Richard, Johnny and Eric for joining me on this activity...I look forward to seeing everyone on a further outing again soon!

There are 37 photos in Album (Note: Move mouse pointer over larger pic and click on NEXT for better viewing)