A tour of historic and easy East Coast bike paths

The Blackstone River Bikeway [BRB], currently an 11.6-mile paved route from Cumberland, R.I., to Woonsocket, R.I., is a gem of a bike path that meanders along its namesake river, sheltered from the surrounding communities. The southern terminus is just a short on-street ride from Providence, and several parking lots provide access by car. Though the BRB is not as well known as the popular East Bay Bike Path (EBBP), which begins within the Providence city limits, that’s bound to change when northern and southern extensions are finished. The completed BRB will be 48 miles, linking New England’s second- and third-largest cities, Providence and Worcester, Mass. The BRB will then connect to the EBBP, forming an uninterrupted route that will eventually total more than 65 miles.

The BRB and EBBP are just two of hundreds of rail trails in the Northeast, where an extensive network of old railways and canals is ideal for converting into recreational areas. According to the Rails-to-Trails Conservancy, the Northeast boasts more than 450 rail trails—a third of the nation’s total—with nearly 4,000 miles of pathway, and another 2,200 miles in the works.

The BRB is a shining example of the opportunities that former industrial corridors offer. The bikeway runs through the heart of the John H. Chafee Blackstone River Valley National Heritage Corridor, so designated for its role as a birthplace of the industrial revolution. As we ride through Lincoln and toward Woonsocket, Ben points out some highlights, including the old canal that parallels the Blackstone River. We’re riding on what was likely the original towpath, which divides the still water of the canal from the river.

Completed in just three years, from 1825 to 1828, the canal flowed for 48 miles and through 48 locks between Worcester and Providence, opening up the former as an important inland port. The bikeway, which now follows the general path of the canal and borders it in many places, is approximately 25 percent complete a decade after the first section opened. The river itself is a recreational resource as well, although pollution—some of it from the discharge of dyes, heavy metals, and chemicals more than a century ago—continues to affect the water, and the Blackstone is currently considered suitable only for boating.

A large parking lot off of Front Street in Lincoln is situated at the start of a 5-mile stretch that is both scenic and remote, though today we opt to ride all the way from Front Street to Woonsocket, a 20-mile round trip. A snack break at the granite benches overlooking the Manville Dam gives a view of one of the waterfalls.

There are plenty of other sights to see as well. A former Owens-Corning fiberglass plant, old bridges, and remains of the canal’s original locks are among the many remnants of the industrial revolution that dot the trail. Free tours of the Wilbur Kelly House Museum (adjacent to the path about 4 miles from Front Street) are also available for those interested in the history of transportation in the area. 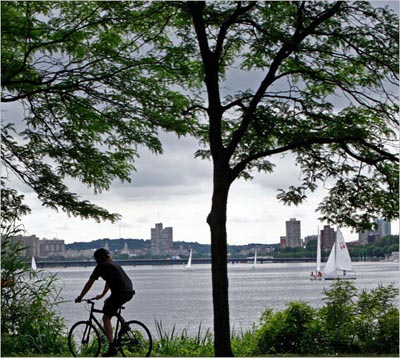 and then only as a temporary concession. Prominent physician Paul Dudley White—he treated President Dwight Eisenhower, among others—was a firm believer in preventive cardiology and, not coincidentally, an avid cyclist. He persuaded park commissioners to suspend the bike ban for a year, and seven years later it was lifted permanently. In the 1970s, the path along the Charles River was extended from the Esplanade into Watertown, and back along the Cambridge side of the river. That 16-mile loop now bears White’s name, while another path continues all the way to Waltham, adding 6 more miles to the route. The Charles River is a great resource for all kinds of bicyclists. It’s a recreational path as its own destination, a natural route to some of Boston’s key destinations, and a wonderful, off-road alternative for connecting different parts of the city for commuters. Three miles of Memorial Drive in Cambridge, from the Eliot Bridge to Western Avenue, are closed to motor vehicles on Sundays from late April to mid-November, providing four additional lanes for bike, skate, and foot traffic.

Farmington Canal Heritage Trail
Hamden, Conn., to Cheshire, Conn.
12.3 miles one way (paved)
The Farmington Canal Heritage Trail shares much in common with the Blackstone River Bikeway. Both trace the path of an 1820s-era canal, and both are still works in progress. Ultimately this trail will connect the New Haven waterfront to Northampton, Mass., along much of the original 86-mile canal’s route. Several sections have been completed, totaling more than 33 miles in Connecticut and 2.5 in Massachusetts. Access to the 12.3-mile stretch from the New Haven/Hamden border into Cheshire, Conn., is convenient, with ample parking available off of Sherman Avenue in Hamden. An out-and-back ride into Cheshire to the north will pass Sleeping Giant State Park as well as Brooksvale Park. Just across the Cheshire town line is Lock 12, one of the canal’s original locks. Once the southern end of the path is completed, commuters will have a car-free route directly into the heart of New Haven.

Manhattan Waterfront Greenway
New York City
32-mile loop (paved)
There are dozens of New Yorks, and the Manhattan Waterfront Greenway touches upon many of them. Chelsea, Battery Park, Chinatown, Lower and Upper East Sides, Harlem, Washington Heights: This 32-mile loop of the island passes these neighborhoods and many others, providing the sort of diverse view of Manhattan that a day of walking, or even subway-hopping, never could. For island-bound cyclists who don’t want the adrenaline rush of riding the city streets, the Greenway is one of two choices—the other being Central Park. But only the Greenway offers immediate relief from the congestion of the city. With a few exceptions, where the route requires on-street detours, water and open sky accompany the journey. That is particularly true along the Hudson River on the West Side, where a majority of the Greenway is completed and in stellar condition. Parks and refreshment stands dot the route, and only a brief detour at West 135th takes the path away from the river. The East Side provides some variety, but also includes more on-street biking (with dedicated bike lanes), and the path itself needs to be repaved in several sections.

Delaware and Raritan Canal State Park Trail
New Brunswick, N.J., to Trenton, N.J.
33.9 miles one way (dirt)
Slicing through the center of New Jersey is a cyclist’s dream come true: The packed-dirt D&R Canal State Park Trail covers more than 30 miles from New Brunswick to Trenton. The surroundings are a revelation as surprisingly few roads run parallel to the path, creating a sense of remoteness in the midst of the nation’s most densely populated state. You can go forever. It’s very scenic and pastoral, given that it’s in the middle of New Jersey. The Princeton section is perhaps the most scenic. For 3 miles, the path runs between the canal on one side and Carnegie Lake on the other. And if all of that still isn’t enough, high-mileage cyclists can continue for another 30 miles by connecting to the feeder canal path that runs north along the Delaware River from Trenton, a short on-street ride from the trail’s western terminus.

BWI Trail and Baltimore & Annapolis Trail
Glen Burnie, Md., to Annapolis, Md.
BWI: 12.5-mile loop (paved); B&A: 13.3 miles one way (paved)
These two paths, located just south of Baltimore, provide local cyclists with 25.8 miles of uninterrupted off-street cycling. The B&A Trail connects Annapolis in the south to Glen Burnie in the north, where it meets the BWI Trail at Dorsey Road. The B&A is the center of a 66-foot wide corridor of parkland, with several access points and numerous businesses catering to the trail’s visitors. Though lacking some of those conveniences, the surprisingly remote BWI Trail passes through several ecologically sensitive areas where the paved path gives way to wooden bridges—all despite the proximity to Baltimore-Washington International Airport’s busy runways. Several parking areas are available along the B&A Trail, while the BWI Trail can be accessed via public transportation in multiple locations, including the Linthicum and Cromwell light rail stations and the BWI MARC/Amtrak station. Both paths are conveniently located just 10 miles from Baltimore and 30 miles from Washington, D.C.

Courtesy of the Appalachian Mountain Club