Join us Mother's Day for a moderate there-and-back-again 7 mile hike via the Appalachian Trail in western CT. We'll hike near the western border of CT up and over a well forested ridge, down

From points west in NY state, take NY State Route 22 to State Route 55 in Wingdale and head east on Route 55 to the CT state line. The AT trailhead parking area will be on the right just after crossing the state line.

From points in CT take US 7 in western CT to Gaylordsville and turn west onto State Route 55. The AT trailhead parking area will be on the left approximately two miles from the junction of US 7 and Route 55.

The first section of the CT Appalachian Trail with a spur to Bulls Bridge is one of my favorite hikes this time of year. Bob "the biologist" joined me on a perfect spring hike. The beginning of the hike can be a bit muddy, but we've only had a modest amount of rain recently, so it wasn't too muddy this time. There's a cute little stream that was bursting with wildlfowers, including a showy purple/pink one that we later identified as Japanese primrose. Then we crossed Route 55 to continue and began our ascent of Ten Mile Hill. Perhaps it was be cause Bob was along, I noticed even more than the usual variety of wildflowers--violets of course, but also trillium, columbine, Solomon's seal, and others with more Latin names the Bob looked up with his PlantNet and Seek apps. After reaching Ten Mile Hill we descended down to Ten Mile River and followed that east to the Housatonic River. Both rivers were more vigorous than usual. At the mouth of the Ten Mile we crossed over the newly refurbished iron bridge to start following along the Housatonic. The rapids were crazy and we saw a few kayakers braving them. I always imagined that I would like to live and sleep near a river, but this river was almost too loud. We eventually reached Bulls Bridge Road where the first modern bridge crosses to an island in the middle of the river where we had lunch and snacks. Then we wandered down to a spot right next to the rushing water. We headed back up and continued to the one-lane covered Bulls Bridge. Coming back through the bridge we then took a look at the dam above the bridge. We returned by a wider detour path that took us back to the iron bridge. Normally I notice the steeper ascent of Ten Mile Hill in the reverse direction, but I seemed to be pleasanty distracted with our conversation. We ran into a thru hiker by the trail name of One-Eyed Jack who had started from Harpers Ferry, WV, and was headed to Maine. He then planned to start again from Harpers Ferry and head south to Georgia. That seemed a sensible way to avoid the crowds of hikers starting from Georgia in the spring. We finished our hike as the clouds started rolling in with a few sprinkles. 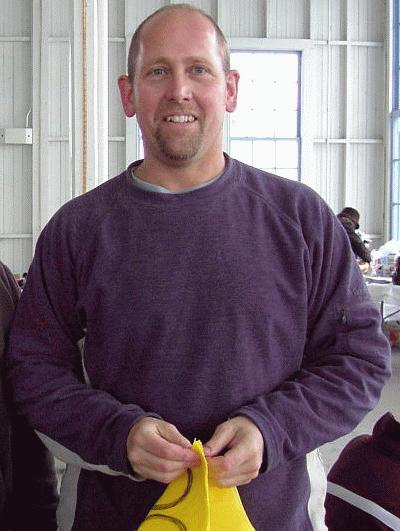