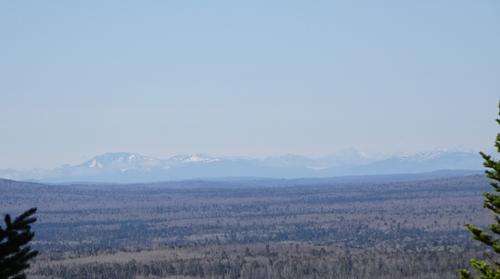 This was a loop hike up Quaggy Jo Mountain in Aroostook State Park, located in Presque Isle, Maine.  The elevation of the South Peak is 1,213 ft.  North Peak is 1,141 ft.

It was a nice spring day with a clear blue sky and slight breeze.  The temperature was around 40 when I started and got a little warmer towards the end of the hike.

The view to Katahdin 65 miles to the southwest was excellent.

After the South Peak I continued on the much easier Ridge Trail towards the North Peak, about one mile away.  About 1/3 of the way between the South and North peaks there is a small runoff brook with a trail that runs along it.  Spring is really the only time of the year there is any amount of water in the brook, so I took a detour going a little downhill to get some pictures of the mini waterfalls.

I stopped at the picnic table and lean-to for a snack break.  Right after arriving I met a family here and they took a break in the lean-to.  I stayed here 20 min. before continuing on to the North Peak.

The total loop was between 2.75 and 3 miles.  The hike took almost 2 hours.  The total elevation gain was around 900 ft.

After the hike I went to Houlton Farms Dairy to get a chocolate milkshake.  They just opened for the season on Friday and were very busy.

*** The picture at the very end is of the picnic table on April 18, 2020!   Spring arrived much earlier this year.   The last few years there has been a fair amount of snow on the ground well into April.  ***

Aroostook State Park bears the distinct honor of being Maine's first state park. In 1938 interested citizens of Presque Isle donated 100 acres of land to the State of Maine, and following that gesture, the park became reality in 1939. Today the park totals nearly 800 acres thanks to subsequent donations and purchases.

There are 39 photos in Album (Note: Move mouse pointer over larger pic and click on NEXT for better viewing)