Hike to the site of the Broads Camp 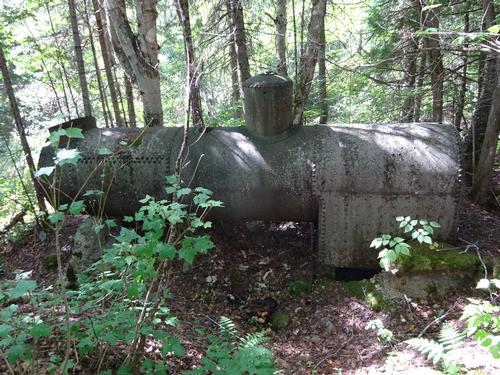 No Labor Day crowds on this hike.  Only me!

A Facebook friend told me about the site of an old logging camp and mill.  I got the directions from him and decided to go find it.

I was able to find the location without any problems.  The hike was easy, almost 1 mile from my parking spot walking on an old road.  It only took me 18 minutes to reach the site.

There are remains of an old steam boiler at the site, as well as many artifacts around.  I'm sure there is a lot more to see, but hard to see because of the leaves on the trees.

My Facebook friend has done some research on the site.  He was able to find it by looking at old maps from the 1930's.  The site is marked on the map as Broads Camp.  He thinks this site was active in the early 1900's.  There was a lumber mill on site that cut block wood to later be used to make shingles.

He thinks the buildings were burned at some point, either be accident or purposely.  I know many landowners' would burn buildings if they weren't being used to prevent squatters or vandalism, and to not have to pay taxes on them.

My father recently passed away and this was my first hike after.  We went on hikes when I was younger.  I have a small container with some of his ashes, and I carried that with me in my backpack.  This is a hike he could've done if he was still alive as it was easy.  I know he would've loved the old boiler.

This was a perfect day for a hike. My total time was 1 hour 48 min., going just over 2 miles.  I did wander around the old mill/logging camp site.

Once I left the pavement I only met one 4-wheeler and one vehicle, and that was in the first 7 miles.  I almost ran over a partridge!  My total road mileage for the day was 104 miles, with about 25 miles on woods roads.

There are 36 photos in Album (Note: Move mouse pointer over larger pic and click on NEXT for better viewing)