Hike to the Round Pond Mtn fire tower. 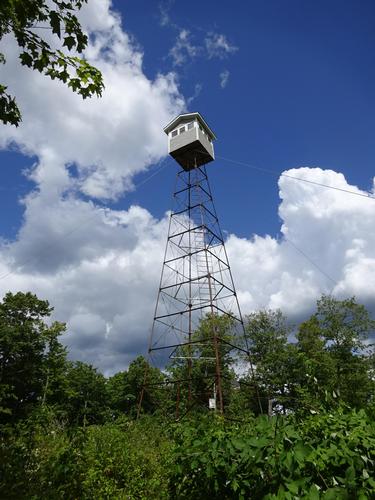 Last week the state of Maine placed a new cab on Round Pond Mtn tower via helicopter.  Someone on Facebook posted a picture of the helicopter carrying the cab from down on the Allagash River.  Seeing that got me intrigued.

I did not have much info on overland access to the tower.  Primary access is a trail from Round Pond using a canoe.  A Facebook friend had been there 3-4 years ago and posted directions.  New roads have been constructed and they are not shown on satellite images.  I found a crude map from the management plan the state created for the land they own in that area.  It gave me an idea of the route.

With the info I had, I figured the road walk directly to the fire tower was around 5 miles.  Even though I was aware the gate might be there, I really wasn't expecting a 10+ mile hike.  Luckily I had enough to eat and drink to go on a long hike.  The nearest store was 50 miles away, and if I hadn't brought enough supplies with me, that would've been the end of any hike.

I also wanted to check out Round Pond as well before going to the tower.  From looking at the map I had and Google Earth, I could see there was some sort of road that goes close to the pond.

I started my hike on a gravel road and paid attention to where the road that goes towards the pond forked off.  Not to my surprise it was a winter road, so no gravel after that point.  Luckily the going wasn't' bad, just some tall grass and a few bushes.

Further on I came upon a beaver dam flooding the road.  Not knowing what was beyond I debated about turning around, but decided I'd continue on and make my way around the beaver dam.  Nasty beavers!!!!  LOL

After a while I came to an intersection where the road turned north.  I knew I was getting closer to the pond and would continue to follow the winter road no matter what Mother Nature threw at me.  Luckily there weren't any more beaver dams.  The grass did get taller, and there were more bushes, but nothing terrible.  I had shorts on, so my legs did get scratched.

I came upon a side trail that went to Jalbert's sporting camps.  I took the trail to check out the camps.  No one was around when I was there.  I returned to the winter road and found where the Tower Trail crossed.  I followed the trail down to the campsite on the pond.  It took me 2 hours to reach the campsite, hiking just over 5 miles, from the gate.

When I arrived at the campsite there was a canoe at the shore, but nobody around.  It took me a minute to realize they must be on the Tower Trail.

While I was having my lunch a man and woman came off the trail.  They had hiked to the tower, but did not climb it because the sign on the trail said the tower was closed.  That sign has been there for years, and didn't stop me from climbing the tower.

The trail to the tower is 2.5 miles long and it took almost 2 hours.  The trail is easy, with only a steep stretch before the tower.  The elevation gain on the trail is about 725 ft.  You have to climb the tower to see any views.  It was nice to see a brand new tower cab.  The tower frame has been there for years, and the state recently fixed it up.  I hung out for a while at the tower and in the cab.

For my return I followed an ATV trail down off the steep part of the mountain to a road.  This is the part I have little info on, and just a crude map.  While walking the road a pickup truck came along.  It was an Allagash ranger going to check out the tower and take pictures for their weekly report.  I've met this ranger at least twice before during my travels.  The last time was during my hike to the Pump Handle Trail in Jan. 2019.  I have a report of that hike on GO.

After talking to the ranger I continued on my way.  Eventually I passed the winter road I had hiked on earlier and made it back to the gate.  I estimate the distance from the tower to the gate to be a little over 5 miles.  It took me almost 2 hours to do that stretch.  Luckily it wasn't very hot and there was a little bit of breeze because there wasn't much shade along the road.

A few minutes after I got done, the ranger passed through gate.  He stopped and we talked a bit again.

I don't have anything to track my mileage, but from using Google Earth and mile markers on the road, I figure my hike was around 13 miles and took me almost 6.5 hours.  The biggest elevation gain was on the tower trail, with a small amount of elevation gain going out.  I'd guess around 1,100 feet total.

Besides being a long hike, it was a rather long drive as well.  It was 92 miles from home to the start of my hike.  My total road mileage was 180 miles, with 100 of that on woods roads.

The only road traffic I met in the woods was the ranger.  Not counting the people at the checkpoints, I only met 3 people in the woods, the couple canoeing and the ranger.  I saw 3-4 moose and 4-5 deer while driving.  I saw several partridge while hiking and driving.  One partridge got showered in dust!  LOL

There are 66 photos in Album (Note: Move mouse pointer over larger pic and click on NEXT for better viewing)