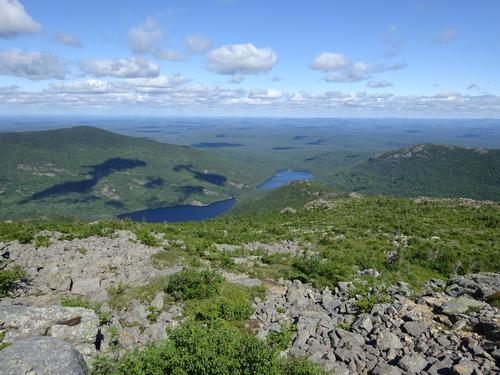 This was a long hike on the Traveler loop trail at the north end of Baxter State Park. The loop is about 10.5 miles long with a cumulative elevation gain of 3,700 ft to 3,800 ft.  The hike took us 9.5 hours, and I do spend some time taking pictures.  The hike compares to Katahdin in elevation gain and time, although Katahdin is more rugged.

Traveler is close enough for me to do as a single day trip but I wanted to get another camping trip in, so I decided to camp out the night before and after the hike.  I camped at Matagamon Wilderness Campground, which is just about 1.5 miles from the north gate of Baxter.  My campsite was on the bank of the East Branch Penobscot River.  The campsite was fairly spacious, but there isn't any privacy between campsites.  There are a few sites further back from the river that are more private.  It was not busy when I was there, and I only had neighbors on one side of me on Thursday night.  When I left on Friday morning, more campers were arriving.  I only noticed 2 other tents in the campground, the rest were in camper trailers.

One thing I don't approve of in regards to the campground owners is their attitude towards masks.  They had a sign at the counter that said that they don't require their employees or customers to wear a mask, and to consult the U.S. Constitution.  I didn't like that, but since this campground is a place I may need to camp at in the future, I have to ignore the attitude of the owners.  This is also a good spot for me to stop after a hike to get something to eat, or a milkshake.

My friend Andy from the Caratunk area drove up to hike with me.  I had told him about the Traveler loop a while back, and it was something he was very interested in hiking.  Even though I'm closer, he is the one that made the whole trip a single day.  It was a very long day for him, with about 4 hours of travel each way.

We started the hike at 7:20 A.M.  The loop begins and ends at South Branch Pond Campground on the Pogy Notch Trail.  We went up the Center Ridge Trail, crossed over the main summit of Traveler, crossed a ridge between the Traveler summit and North Traveler and down the North Traveler Trail.

The first stretch of the Center Ridge Trail is rather steep.  It doesn't take long to start getting some nice views.  The top of Center Ridge is referred to as the Peak of the Ridges, and is completely open.  We stopped here for a snack break and to take in the views.  It was here that I realized I goofed and forgot to pack the two peanut butter sandwiches I made the night before.  Luckily I had made a ham sandwich in the morning, and had chips, crackers and granola bars.  The elevation here is between 3,225 ft and 3,254 ft. It took us 2 hours 52 min. to reach this spot, going 3.6 miles.  The elevation gain to the Peak of the Ridges was around 2,312 ft.

After the Peak of the Ridges the trail crosses a "mini" Knife Edge and drops down to a low spot.  From that point the trail goes up the main summit of Traveler, crossing a talus slope along the way.

The main summit of Traveler is completely open with excellent views in all directions.  The elevation here is 3,541 ft. and is the highest point of the hike. It took us 4 hours 25 min. to reach this spot, going 4.8 miles.  The cumulative elevation gain to the main summit was around 2,965 ft.

The wind was extremely strong on the summit; some of the strongest wind I've ever encountered on a hike.  It was a struggle to walk or stand at times.  The wind actually blew Andy over! It basically knocked him to a sitting position on a boulder and he wasn't injured.  I didn't see that happen because I was trying to get a picture of the summit sign, which was also a struggle!  We took some shelter from the wind and had a snack.  I was able to get some pictures, but it was a struggle at times.

We continued on to North Traveler, crossing a mostly open ridge between the peaks.  The wind was strong at times, but not nearly as bad as on the summit.

In the low spot between the ridge and North Traveler there are some stunted white birch trees.

On the final accent up North Traveler we stopped to have another snack break while we still had some cover from the wind.

We reached the summit of North Traveler, which is between 3,144 ft and 3,152 ft.  The summit is basically open with a little scrub and short trees in places.   It took us 7 hours 22 min. to reach this spot, going 7.3 miles.  The cumulative elevation gain to North Traveler was around 3,770 ft.  It was still windy, but not as bad as the main summit.  We didn't stay here very long since we had a snack break a few minutes earlier.

The North Traveler trail is very interesting.  It follows a mostly open ridge.  In some places there are grassy (meadow like) areas.  In one spot there are stunted white birch trees.  Along the stretch of white birch there is an obscure side trail to a spring.  There is a little bit of uphill over some knobs along the ridge, which appear as false peaks if you are ascending North Traveler.

We ended the hike at 4:50 P.M.  Andy headed back home while I headed back to the campground.

The weather was good.  The only down side was the extreme wind, but even that was bearable since it wasn't extremely cold.  I had a light jacket in my backpack, but never put it on.

The Traveler loop is not nearly as well traveled as Katahdin.  From my understanding Baxter created this route to try to draw people away from Katahdin, but I don't think it worked!  We met 4-6 people on this hike.  From the Peak of the Ridges onward 4 of the hikers and us kept fairly close to each other, flip flopping along the trail.

I'd highly recommend this hike. It is a rather strenuous hike going over the 3 peaks.  Andy said the hike reminds him a little of Franconia Ridge.  It is interesting to stand on a peak and see the route you've traveled or need to travel.

There are 131 photos in Album (Note: Move mouse pointer over larger pic and click on NEXT for better viewing)