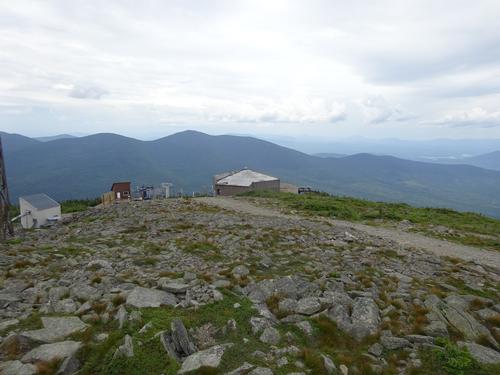 Spaulding Mtn is one of two 4,000 footer's in Maine I have yet to hike.  Redington is the other.

These mountains are over 250 miles from home.  I managed to find a campsite for two nights at Happy Horseshoe Campground in Lexington, about 30 miles from Sugarloaf.  Closer campgrounds were either full on Sat. night, or out of business.

The campground is nice.  There are tent sites on a little rise amongst the pine trees.  I like these sites better than the sites for camper trailers as those sites are very close to each other.  I don't like camping that close to my neighbors!  Besides myself, on Saturday night there was only one other guy camping in the tent sites.  Everyone else was in camper trailers.  It was very busy on Sat. night, but nice and quiet on Sunday night.  I arrived just in time for a bean supper.  Even though the campground is kind of crowded, I would stay there again in one of the tent sites.

I did Sugarloaf back in July 2002, but figured I might as well do it again since I was so close to it.  There is a guy in the area that gives rides to hikers.  To lesson the amount of retracing my steps, I decided to give the guy a call.  I parked my vehicle at the base of the Sugarloaf ski area and he gave me a ride to the gate on the Caribou Valley Rd.

There were several vehicles parked at the trailhead.  Two ladies started just before me, and as I approached where the Appalachian Trail crosses the road, I seen them turn southbound.  I met them a short distance later.  They had stopped to look at their phone.  They asked me if I was doing the loop?  I told them I was doing Spaulding and Sugarloaf. They were referring to the Crocker/Redington loop.  They did realize they made a wrong turn, but it made me wonder how their day was going to go if they were making a wrong turn 1/2 mile into their hike!?

The crossing of the Carrabassett River was made easy with a plank between two boulders.  The trail parallels the river for a ways, then turns to make the steep climb out of the Caribou Valley onto the shoulder of Sugarloaf.  It was on this stretch that a guy who was getting ready for his hike when I started passed me.  This was the steepest part of the hike.  The trail gets easier as it approaches the rim of the ravine on the west side of Sugarloaf.  There are a few viewpoints along this stretch.

The stretch of trail along the ridge between Sugarloaf and Spaulding is fairly easy. There is some minor loss and gain in elevation along the ridge.   It was along this stretch that I met the same guy who passed me earlier heading back.  I said to him he must be doing the 4,000 footers, and he said yes.  He was way faster than I was. The hike up Spaulding is steady, but not overly steep.  The steepest stretch is the short side trail off the A.T.

Spaulding is not spectacular, but there is a view to the north beyond the summit.  The view is to Sugarloaf and Bigelow Mtns.  I had the summit area to myself, but met two ladies coming up the side trail as I was leaving.  From Spaulding I retraced my steps to the junction with the summit trail up Sugarloaf.

Looking at Sugarloaf from Spaulding, it looked like it might be difficult.  It wasn't as bad as I thought.  A steady climb, but not overly steep.  The trail is in the trees until just below the summit.

It had gotten cloudy by the time I reached Sugarloaf.  Not long after arriving there was a rain shower and clouds rolling over the summit.  It got windy during this time as well.  I hung out in the covered entryway of one of the tower buildings during that time.  Even with the passing clouds and showers I did manage to get some pictures.  The conditions weren't great, but better than my previous trip in July 2002.

I know I would've had better conditions on Sugarloaf if I had hiked that first.  But going up the ski trails and service road with very little shade wasn't appealing to me.  Even at 6:30 AM, the bright sun and humidity would've been uncomfortable.

I met a few people on the summit of Sugarloaf.  I spent almost 1.5 hrs at the summit waiting to take pictures and exploring.  Some of this time was exploring the old summit building that used to be the gondola station. It is closed, but I managed to find a way inside!  It is too bad the building couldn't be repurposed.  On my previous trip the building was open and people were even allowed to camp inside.  Someone even provided water in jugs at that time.

After exploring the summit building I headed down the service road.  The footing is tricky with lots of small loose rocks.  Further down I switched to the ski trail, and it was a little easier until I reached a really steep stretch with tall grass.  At that point I rejoined the service road.  Using the ski trail on the upper end is something I'll try if I hike Sugarloaf again as I think it will be easier.  I passed two guys on the way down.  One of them I met at the top.  The other guy was his father, and he didn't go all the way to the summit.

Near the bottom of Sugarloaf another shower passed.

I completed the hike in 8 hours 12 minutes, going around 10.3 miles. Total cumulative elevation gain was around 3,376 feet.

On my way back to the campground I stopped at the Carrabassett Valley Airport to take some pictures.  Just in those few miles, and lower elevation, the humidity there was very noticeably different than at the base of Sugarloaf.

Someday I'll knock Redington off my list, but I don't have a huge desire to go there.   :)  LOL

There are 119 photos in Album (Note: Move mouse pointer over larger pic and click on NEXT for better viewing)