Hiking the "quiet" side of Katahdin 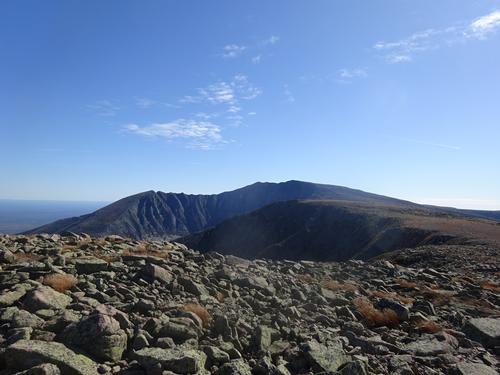 Trip to Baxter State Park to hike the "quiet" side of Katahdin.

I managed to get a cabin at Daicey Pond for Sunday night.  I arrived at the cabin in the late afternoon.  It was a cool night and I was glad I had a cabin with a wood stove.  The fire was out by morning but it was still warmer than outside.

It was a perfect day for a hike up Katahdin on Monday.  I went up the Chimney Pond Trail from Roaring Brook to the North Basin Cutoff.  Before going up Hamlin Ridge I went to Blueberry Knoll and the pond in the North Basin.  The pond is technically a bushwhack but I came upon what looked like a heard path and noticed someone had marked the route with cairns.  I had the North Basin all to myself.

I met some people coming down Hamlin Ridge and a few people stopped and/or passed by while I was at Hamlin Peak.  To my surprise a lady came off the North Peaks Trail.  She had come from Russell Pond and was doing the loop using the Northwest Basin Trail.  She was going to stay the night at the lean-to at Davis Pond in the Northwest Basin.

I decided to venture over to the North Peaks (aka Howe Peaks).  This was easy compared to Hamlin Ridge.  There are two actual peaks plus several rocky knobs.  This trail is not nearly as well traveled as other trails on the mountain.  There really isn't much for a defined footpath.

I turned around at the last rocky knob where the trail drops down off the ridge.  I wanted to continue to the final rocky knob down the ridge but it would've required climbing back up 500 feet in elevation and it was already 2:30 in the afternoon.

I made my way back across the North Peaks and joined the Northwest Basin Trail at Caribou Spring.  I was surprised to meet a couple on the North Peaks Trail hiking down to Russell Pond.  The water from the Caribou Spring was crystal clear and ice cold.  There was even a piece of ice on the trail there!  From the spring I continued to the Saddle Trail and dropped down off the mountain on the somewhat tricky Saddle Slide.

I finished my hike in the dark, using a flashlight for the last 20 minutes.

There are 93 photos in Album (Note: Move mouse pointer over larger pic and click on NEXT for better viewing)