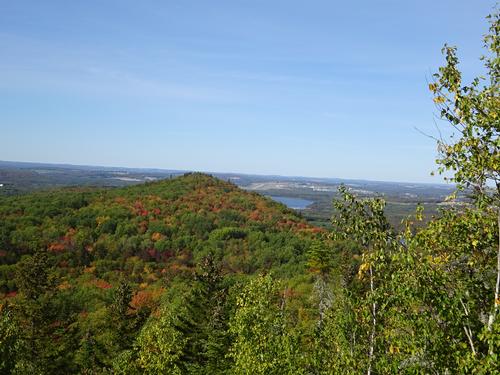 The leaves are starting to change and the geese are flying south!  Where did summer go?  LOL  Summer did seem short this year.  ** As I'm typing this report I can hear geese out the window.  **

This was a loop hike up Quaggy Jo Mountain in Aroostook State Park, located in Presque Isle, Maine.  The elevation of the south peak is 1,213 ft.  North peak is 1,141 ft.

I met a man and his dog at the south peak.  I stayed there for a few minutes to take in the view.

After the south peak I continued on the much easier Ridge Trail to the north peak, stopping at the lean-to and picnic table along the way.  A man and woman were taking a break in the lean-to when I arrived.

It took me 28 min. to get from the south peak to the north peak, a distance of almost 1 mile.  I stopped at the north peak for a few minutes before heading down.

I met a total of 8 people on this hike.  That is actually a lot considering I normally don't meet anybody when I hike these trails.

After the hike I walked down to the shore of Echo Lake.

This was a perfect day with clear blue skies and the temp. close to 70.

Aroostook State Park bears the distinct honor of being Maine's first state park. In 1938 interested citizens of Presque Isle donated 100 acres of land to the State of Maine, and following that gesture, the park became reality in 1939. Today the park totals nearly 800 acres thanks to subsequent donations and purchases.