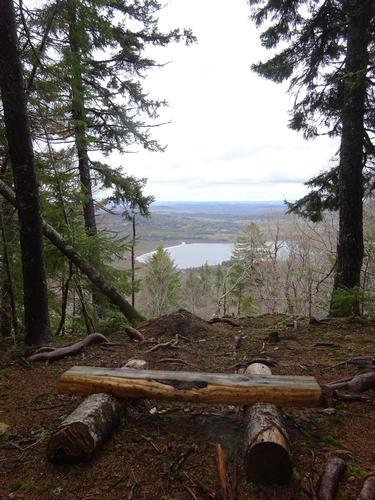 To be politically correct I'll call it Scopan Mtn, but to me it has always been Squapan Mtn.  Because Squa sounds like Squaw, several years ago the name was changed because Squaw is considered a derogatory word to Native Americans.  I understand the reason, but it is still hard to get used to the new name.

This was an easy to moderate hike.  The main reason for the hike was to check out the little waterfall before it turns into a trickle.  The only times there is really any water is during the spring or after a heavy rain.

The trail is 3.5 miles long and the total elevation gain was between 750-800 ft.  There is some steady climbing in some spots to get up to the ridgeline, and then some minor knobs to go over before the decent.  There was one minor uphill climb on the descent.  The leaves made the footing tricky in some spots, but I did not fall down.

The highest point on the trail is at the viewpoint that looks off towards the east.  The elevation there is around 1,400 ft.

It took me 2 hours to complete the hike.  I did spend a few minutes at the waterfall.  I had the trail all to myself.

There are 34 photos in Album (Note: Move mouse pointer over larger pic and click on NEXT for better viewing)