Ride to check out the wrath of the wind! 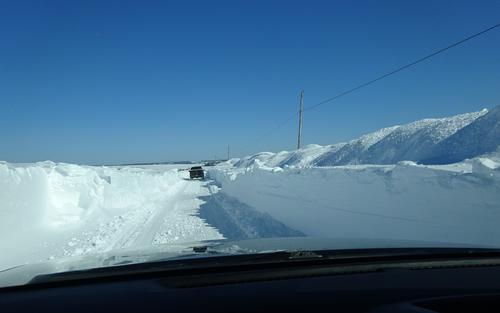 This may be a stretch for an outdoors activity, but I was exploring nature's wrath!  LOL  And, I did get some outdoors exercise when I shoveled the roof for a friend/neighbor after the ride.  LOL

On Sunday night and Monday morning we had 8-9 inches of powdery snow.  On Tuesday and Tuesday night there was major wind.  Sustained winds were in the mid/high 20 MPH range with gusts up to 45 MPH!!!  That wind blew the snow all over the place.  There were many accidents during this, but no major injuries. Some people were stranded in their vehicles and had to be rescued.  And I think some people spent the night in their vehicles.

Luckily on my drive home from work late Tuesday afternoon I only had one bad spot to go through.  But, that one spot was bad enough when you can't see because of the blowing snow.  Luckily I could see the snow bank on the right side of the road.

On Wednesday afternoon and again today, I went out for a ride around town to check out the aftermath of the wind.  There are many spots where the roads are one lane!  Snowdrifts actually plugged many roads, but I think all roads are now open.

This has been an extreme and long winter.  There has been snow on the ground since Nov. 10.  The Natl. Weather Svc office in Caribou has had 147 inches of snow for the season as of March 1.  That is a record for that date.  Normal snowfall for the entire season at Caribou is 109 inches!! I'm not sure what the normal seasonal snowfall amount is for March 1, but I think we are close to 6 feet!!! above normal.  The weather office in Caribou currently has 45 inches of snow on the ground, and there are higher amounts in the woods.

We are now ahead of pace for the record year of 2007-2008 when Caribou had around 197 inches of snow for the season.  March can have big snowstorms, and sometimes April can too, so we could possibly break the record!!!

With all of this snow, the spring melt is going to be interesting.

If anyone wants to check out all of the snow in Aroostook County, come on up!  LOL  My 2 level snow cave with balcony, and newly added rooftop terrace, is still surviving!  LOL

Normal seasonal snowfall by March 1 is 83 inches at Caribou.

There are 66 photos in Album (Note: Move mouse pointer over larger pic and click on NEXT for better viewing)