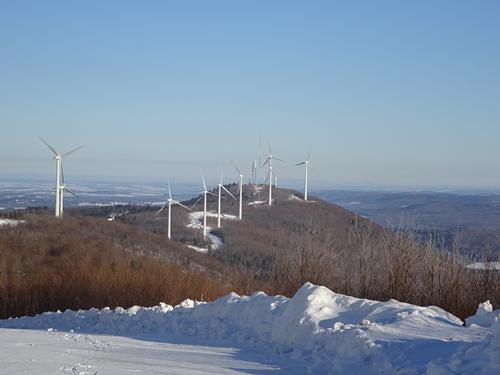 I've done several traverses of Mars Hill in the warmer months, but never in winter.

Yes, I know that according to the calendar it is still fall, but when I look out my window it is f*ck*ng winter!   LOL  It has been winter here for over 1 month now!

I left my pickup truck at the end point, and had a friend give me a ride to the start point at Bigrock ski area.  I started my hike before the ski area opened for the day.

I used snowshoes to go up the ski slope.  The ski slope was groomed and solid, so the walking wasn't difficult.  Mars Hill is steep, so it does give you a workout to get up to the ridgeline.  The elevation gain going up the ski slopes is 930 ft in about 0.8 miles.  I do not hike straight up the ski slope, as that is rather difficult.

Once to the top of the ski slopes, I headed to the south peak.

After the south peak, I removed my snowshoes and walked the plowed windmill access road all the way to the north peak, which is about 2.4 miles.  There are some minor ups and downs along the road, but nothing difficult.  The road is also the route of the Intl. Appalachian Trail.

Once at the north peak, I put my snowshoes on again.  There is 0.9 miles of trail I had to go on to get down the north peak.  I had to break trail as no one had been on it.  I did lose the trail in a few spots, but quickly found it again.

The last section was on another road that goes to the windmills along the north ridge.

I was alone on the hike, but did see some people when I started at Bigrock, and at the top of the ski lift when I was walking to the north peak.

Mars Hill is really a mountain, and can be seen for miles around.  The south peak is 1,748 ft, and the north peak is 1,595 ft.  It is a prominent landmark in central Aroostook County.

Mars Hill is somewhat famous.  This is from Wikipedia....

By virtue of its height and Northeast location, the summit of Mars Hill is the first place in the United States to see the sun rise for nearly half the year, from March 25 to September 18.[2] The first 50-star flag to see the sun in the U.S. was raised on July 4, 1960 at 4:33 AM. Fifty national guardsmen gave it a 50-gun salute.[citation needed]

There are 49 photos in Album (Note: Move mouse pointer over larger pic and click on NEXT for better viewing)