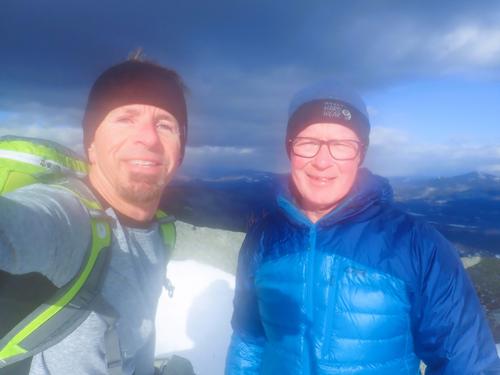 It has been some time since we visited South Moat, a coned peak that’s part of the hard-to-miss Moat Range. The 5.2-mile-long panoramic crest forms a high wall on the North Conway, N.H., horizon. Though South Moat, at 2,770 feet, is the lowest of the mountains along the narrow ridge, its stark, open, ledgy summit offers some of the finest views in the White Mountains from its 360-degree stage!

On a late December morning, with largely brilliant blue skies and temperatures in the low 20s, we set out from the Passaconaway Road trailhead between the Kancamagus Highway and Conway’s West Side.

Lower part of the trail was better than expected, packed frozen ice/snow. After passing by a recent logging road, the pathway climbed somewhat easily through the hardwoods on a wide stretch before dipping and rising. Beautiful icicles were in the brooks and loads of mushrooms on fallen trees. The trail steepened after crossing a short bridge spanning the chilly, rushing Dry Brook filled with gorgeous icicles!

The higher we went, the more ice and snow we encountered! Trail starts to show more ice once we reached the original trail clearly delineated with all the red blazes noting the White Mountain National Forest boundary. The trail has a bit of ice flows. Sharp Hillsounds Microspikes did fine, but I wouldn’t chance this one right now with rock spikes.

A first-rate view opened to the south with the Ossipee Range and frosty Mount Chocorua teaming up! Higher up, when the trail makes a steep climb to the open summit, we found ourselves post-holing in the deep snow…snowshoes would have been best but we did not carry any…it did not seem worthwhile since we were almost on the summit at the point.

On the dizzying summit — especially if you spin — the views were sublime! We could not see the Presidentials today, however we enjoyed the valley views close to North Conway’s Route 16, peaks Kearsarge North and Mt. Cranmore with its ski trails in full display. Mountains like Whiteface, Passaconaway and Tripyramids, part of the Sandwich Range, were readily spotted in the marvelous mishmash of peaks included in an incredible Granite State kingdom accessible year-round by taking it one step at a time.

It was a bit chilly on the summit so we decided to have lunch further below where we first encountered the views of Mt. Chocorua. We even found time on the descent to remove a small branch blocking part of the trail. It was a perfect winter hike on a beautiful day!

There are 22 photos in Album (Note: Move mouse pointer over larger pic and click on NEXT for better viewing)