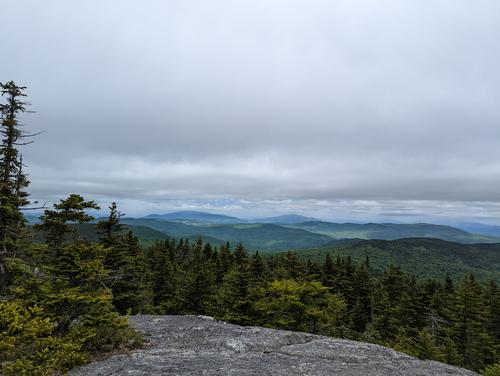 Longer than usual drive for me but Cardigan has been on my todo list for years. Some more recent feedback on this particular loop was less than ideal and the weather was on the boarder of gross. Overcast, cold, rainy, and a little unmotivating. But, after driving 2.5 hours to get here, “F’it, I’m doing this anyway.”

I flipped a coin and did the Cardigan Big Loop clockwise, and broke trail on Woodland Trail right next to a cute little pond that was crawling with mosquito larva and a nice cloud of their adult siblings. Thankfully it was cold and breezy, so I got to move on quickly before being snacked on..

At 0.7 miles Woodland joins with Clark Trail which is more ATV path than anything else. Very easy road walk and lots of overgrown vegetation that slinked past Clark Brook Campsite (not much going on, but had a bear box and a few very close campsites with a large single fire pit.). Woodland and Clark Trail split at about 1.5 miles and continues back into the woods with nice, well marked, forest floor paths. One or two spots where the elevation started to pick up, only to level off and remain pretty easy until connecting to Vistamount Trail at around 3.2 miles.

Vistamount Trail started to descend into the valley pretty sharply, rain started to fall but didn’t really need a rain jacket as the forest absorbed most of it before it got to me. Trail continued to descend until I hit the stream crossing, and had to make up all that elevation in about 100 feet. Very sharp ascent to get back up to the ridge and continue up to Skyland Trail and the Gilman Summit at 3.2 miles.

Gilman had some great views, and some even greater wind that nearly knocked me over. Bone chilling cold hair rushing over the mountain made for some entertaining rock scrambles over the last of the ledge. Met my first group of hikers with two couples in their golden years. Not particularly sociable, so I pressed on and headed over to the West Ridge Trail junction at 4.4 miles.

West Ridge Trail saw a massive uptick in other hikers, including two groups of 10 or more kids each and a few couples with dogs. Going up toward Cardigan was off an on open ledge and steep grades until you break the tree line and the summit comes into view. I thought Gilman was windy, this was approaching hurricane force wind. The remaining hike up to the summit saw the wind go from a 6 to a 9 in short order. Watched a few people go tumbling that weren’t prepared for it as they came out of sheltering at the tower to some comical effect. Wind, cold, and moisture made me break out a set of thermals that I had not yet taken out of my pack (you know, cuz New England…), and I set off to find the trail down the north side of the mountain. Strapped down my hat and anything that might go flying after watching a woman’s rather expensive sunglasses and summer hat go flying off the mountain. I headed out to find the blaze for my trail only to be turned back to the tower three times to get my bearings.

A troop of backpackers appeared out of what I assumed was my trail down, so I bolted for the trail and started my descent from the tower on Cardigan’s peak at 4.8 miles. Steep and slippery, I ended up butt shimmying down about a quarter of a mile until I got back into some semblance of tree cover to proceed along the Mowglis Trail headed to Firescrew Mountain (no clue if that is Fire Screw or Fires Crew). Mowglis Trail was up and down, open ledge, and sporatice alpine trees, for some entertaining gusts that nearly put me back on my ass again.

Reaching Firescrew Mountain at 5.6 miles, the wind picked up but was manageable after so much practice on Cardigan. Made quick progress over the summit and down the north side of the ridge into a wonderfully quiet and creepy forest where there was no wind, no sound, no bugs, no animals, and no people with a real haunted feel to it. Found and took a side trail called Hanging Ledge Spur, cuz why not, that took me about 0.2 miles for a sequestered view of a new side of the valley you can’t see from the other summits. Back on Mowglis and headed to my junction for “Back 80 Trail” at 7.2 miles.

Back 80 Trail at 7.2 miles was all jacked up and closed, but back tracking on Mowglis trail a few hundred feet and was able to cut over on new marked trail and continue down Back 80 Trail unencumbered. A ton of mud at the junction, but only lasted 300 feet or so. Then the final descent started to drop elevation pretty quickly. So quickly at around 7.6 miles the trail was blocked off on what looks like someone’s death slide. A bypass that isn’t on the map took a hard right and I was a bit concerned about the added distance, as it was going way off to the right and my GPS was nagging me to stay on the “you are going to die” trail. Ignored it and was rewarded with a much more gradual sketchy descent that added just over a quarter mile.

Back 80 Trail was a long meander trail with a shelter (maybe derelict, maybe haunted, maybe a perfect place to camp Halloween night), a couple of swampy areas, and literally 2.2 miles of uneventful green tunnel and forest floor. While pretty, and dead quiet, it became tedious pretty quickly after doing 7miles and three beautiful summits.

Back 80 Trail finally dumped out at Manning Trail (dirt campground road) that is connected to the parking lot at 9.75 miles, 3131’ of elevation gain, in 4:45:20 total time. Didn’t even realize that I never stopped for a break until I got back to the car. Ate on the run to stay a head of bugs, rain, and wind all day. I’d do this hike again someday, but unless you are peak bagging, keep it to the more well-traveled and scenic trails.

There are 9 photos in Album (Note: Move mouse pointer over larger pic and click on NEXT for better viewing)