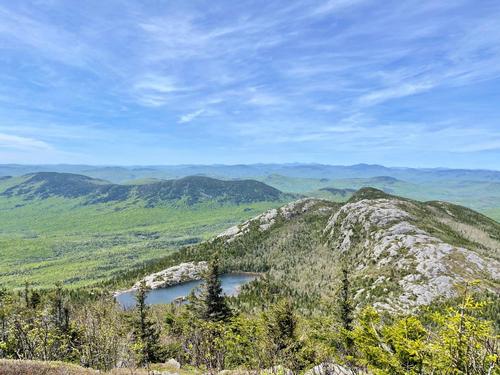 Arrived at the Morgan Road parking for the Parker Ridge Trail at 830 am to meet and greet my hiking companions for the day, they were very friendly and tried to snuggle up nice and close. A quick coating of bug dope and a headnet seemed to quell their bitey demeanor. The blackflies and mosquitos would be constant companions for the day.

Broke trail as quickly as possible to leave my new companions in the dust. Took Parker Ridge Trail for about 0.3 miles until I picked up Little Jackson Mountain Trail. Mild inclines for most of the way, provided I didn’t stop… blood loss remained at a minimum. The last 0.5 miles found inclines increasing drastically until reaching the saddle between Jackson & Little Jackson. Forest was quiet and dry, the birds singing and snakes sunning themselves on the trail were a common theme for the day.

At the Jackson & Little Jackson Junction, I broke right to take the Jackson Mountain Trail up to summit #1. Trail quickly darted into some less traveled but easy to follow trail with dense packed forest and no real opportunities to get off trail. Trail was covered with deer scat, and a beautiful breeze that whisked away the bugs.  Some sporadic ledges made for some great views of the next couple mountains on my itinerary. Summit was about 0.5 miles from the junction and forested in with a radio station. A tiny sliver of a view down the ridge but otherwise forest covered. Early quiet and not another soul to be seen until I returned to the junction.

Met a young guy doing the trail I was doing in reverse, we swapped trail conditions on each other’s paths, he warned Tumbledown Lake was busy for a Monday, and we parted.  Proceeding about 0.5 miles up Little Jackson Mountain Trail for much more expansive views along the north and south sides of the mountains. Wind had picked up significantly on the exposed ledges, which cooled things down quite a bit. Wind on the summit peeled my sweaty hat right off my head and sent it flying. A mad dash to get it back, and I lashed it to my chest. Gorgeous 360-degree views at Little Jackson summit (#2) and a great overlook of Tumbledown lake on my descent via Tumbledown Mountain Trail.

Coming down Tumbledown Mountain Trail from the summit of Little Jackson is steep, descending 500’ or so in .2 miles. Some declines at 60 degrees. Lots of butt shimmying but a rapid descent into the valley on the other side of Tumbledown Lake. Very dense forest, not easy to follow with little to no trail markings. Lost the trail a few times but between paper map, digital map, and watch map overlay, was able to get back on track and make it over to Tumbledown’s main summit (#3). There is one point on the trail where there is a log that is down that covers what looks like a well-traveled path, it is not… you will need to turn hard right and ascend what looks like a boulder about 20’ high. There is a sliver of space between the boulder and some up rooted trees you need ascend to hit ledge where trail markers start up again but is not obvious. I found it on my third pass.  Once over the boulder, you continue the rest of the way to the summit on open ledge, and was accompanied by more of the gale force winds.

Continuing the Tumbledown Mountain Trail, you slide into more dense forest again, but it is better marked and dense enough to not give you many options to deviate from the trail. With the wind now gone, the blackflies and mosquitos took a back seat to the Deer Flies, and I might add are far worse as they will follow you for quite a while as they take chunks out of you. Popping in and out of dense forest and ledges, you reach a side trail that takes you up to Tumbledown Southwest Peak (#4) for a panoramic view of the entire range, the valley, and Webb Lake.

At this point I am on open ledge and ridgeline with clear views all the way down the valley and to both Tumbledown Lake and Webb Lake in the distance. A few sections with rock scrambles that were more hair raising than I remembered but made quick work of them to reach Tumbledown East Peak (#5) and down to Tumbledown Lake. Met two ladies about halfway to the lake, swapped trail conditions and courses, and warned them about the deer flies.

Coming over the last ledge before Tumbledown Lake, I spotted a rather rugged looking guy that looked like a hiking lumberjack taking in the gorgeous view of Tumbledown Lake. Gladly swapped trail conditions and pleasantries before plunging my tired feet and knees into the lake while I ate some squished PB&J sandwiches and a celebratory ginger beer while enjoying the “views’.  Stripped down to dry off in the sun for a bit, before filtering water and packing up for final descent over Parker Ridge Trail. A first time in my life to have Tumbledown Lake to myself for 20 whole minutes before being joined by two more ladies that were coming up from Brook Trail to see the lake.

Back into dense forest for about 0.5 miles, until you open back up on to the spectacular views from Parker Ridge Trail of the valley, Big & Little Jackson, and the entire Tumbledown bason. Trail starts to descend quickly from there, dropping 1600’ in a little under a mile with some short sections that are 60-degree declines. Trail is very easy to follow and well-marked but has seen better days. Significant wear and tear on some sections have given way to erosion. A long green tunnel filled with clouds of mosquitoes and blackflies yet managed to move quickly enough to avoid most of it. Ran into the last two people for the day, a guy and his girlfriend ascending Parker Ridge Trail that chided me on not needing a headnet for a day like today. Had to smile and wish them luck on their ascent.

Rest of the way out was one very long green tunnel with tons of mosquitoes, blackflies, and deer flies. 3 Mountains, 2 prominences, Tumbledown Lake, and weather could not have been better made for an epic day. My Garmin reported this trek coming in at 6 hours and 51 minutes with breaks, 9.13 miles with 4180’ of elevation gain. Buggy in the valleys but the ridges were just spectacular.  A hike I plan to do again in Fall, after first frost.

There are 18 photos in Album (Note: Move mouse pointer over larger pic and click on NEXT for better viewing)