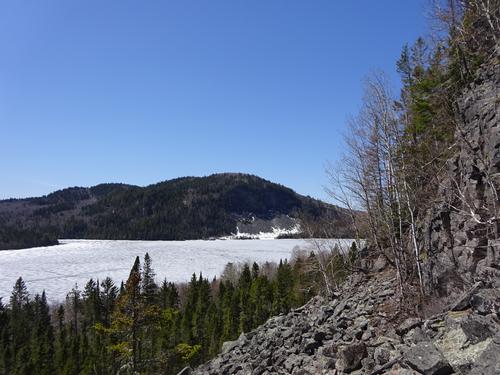 The Deboullie Public Land is a remote area with small mountains and rugged terrain in the North Maine Woods.  It is about 70 miles from where I live, with 27 miles of that on woods roads.

Winter's grip is still holding on at the Deboullie Public Land.  Snow blocked the road about 3/4 of a mile from where the trail starts, so I parked and walked the rest of the way.  Before I started walking the road two guys in a Tacoma came along.  I told them I wasn't going to chance it, but they decided to keep going.  A couple of minutes later they came back. The ponds along the route are still ice covered.  There is plenty of bare ground, but also plenty of snow in spots.  In some spots the snow was up to my knees.

Two stops along my route were talus slopes where I climbed up higher to get better views.  During my stop at Gardner Pond I built a small snowman.  LOL

My hike was around 7.5 miles, and took almost 6 hours.  Elevation gain is hard to determine, but a good guess is 700 feet.  The hike is normally fairly easy, but snow made things more difficult.  I did not meet any other people on the hike.  And I only met two vehicles on the drive in and out, with one being the guys in the Tacoma.  I saw a couple of deer while driving, and several ruffed grouse while hiking.

There are 63 photos in Album (Note: Move mouse pointer over larger pic and click on NEXT for better viewing)