Exploring the woods- the Katahdin Region 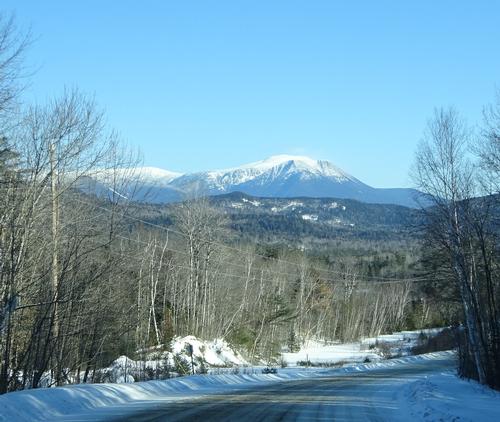 I wanted to take advantage of the sunny weather and go on a trip.  Because of the extreme wind chill I knew it would have to be mainly a road trip with not much walking/hiking.  Even though it was mainly going to be a road trip, it was still risky with the extreme low temperatures and going to a remote area.  I brought warm clothes and a blanket, extra gas, and extra food. I also brought an ax, saw, and I keep a shovel in the bed of my truck in the winter. I left my plans, including an alternative plan, at home.  I don’t have any devices to use to summon help, so if something happened that I got stuck or broke down I’d stay in my vehicle unless I was very close to a place I could walk to get help.

Before daylight I headed south to Millinocket.  My initial plan was to drive north through the woods 114 miles from Millinocket to Ashland.    My ride in the woods started on the somewhat famous Golden Road, which was more like an ice road!  If I had to make a sudden stop it wasn’t going to happen!!! LOL

Not too far after starting out on the Golden Road I stopped to take a picture of a sign.  My phone still worked so I checked the temperature for Millinocket.  -6 with a wind chill of -21!!  I’m not sure if the actual temperature made it above zero that day.

The Golden Rd has excellent views of Katahdin and views of the West Branch of the Penobscot River, which it closely follows for about 10 miles.

I made a quick stop at Abol Bridge to get a selfie of Katahdin behind me.  A short distance up the road I went on a short walk to Nesowadnehunk Falls.

My longest time out in the cold was at Ripogenus Gorge and McKay hydro station.  I walked almost 1 mile at this stop and was out in the cold for 40 min.  This spot was mostly sheltered from the extreme wind.  My next walk in the cold was at Ripogenus Dam where I walked down a road to the base of the dam.  This was about 0.5 miles and took 15 min. and was mostly sheltered from the extreme wind as well.  I would normally walk across the dam and take pictures, but with the extreme wind I decided to drive across instead. I did go for another short walk to get a picture of the dam from a different angle.

The road beyond the dam was plowed so I kept going.  There is a spot where the road goes along the shore of Ripogenus Lake that I wanted to check out.  I ended up getting stuck in a snowdrift but was able to shovel myself out in less than 10 minutes.  Luckily I wasn’t getting the full force of the wind at this spot.  I turned around after this stretch of road and headed back to the Golden Rd.

My next stop was at the boat launch at the south end of Chesuncook Lake.  This is the spot where I felt the full force of the extreme wind blowing down the lake.  I went out along the shore to take some pictures.  In more pleasant conditions I’d explore the remains of the old Chesuncook Dam at this location, but that wasn’t going to happen on this day.  As it was, I had to go back to my truck to warm up before taking more pictures at this location.  A thermometer on a building at this spot said zero!!

After this stop I headed for the Telos Road which heads north deeper into the woods to The Allagash.  The road crosses the West Branch Penobscot River just off the Golden Rd.  There are some rapids here with a view of Katahdin a short walk from the road.

Further up the road I went on a short walk to the dam at Harrington Lake.  It was windy, but the trees did shelter me from the full force of it.

I continued driving north to Chamberlain Bridge in the Allagash Wilderness Waterway.  I didn’t get out here, but took pictures from my vehicle and I drove across the bridge to do that.  To continue to Ashland I’d keep going, but I wanted to make a loop back to the Telos Rd on some other roads, so I turned around here and headed west and then south on the loop. This was on the road less traveled and a good part of it hadn’t been plowed after the last storm.

On the loop there is a side road that leads to a short trail that goes to Chesuncook Lake.  No one had been on this road, but I decided to try it.  It is 2 miles to the end.  It was a little slow going on this road and after almost 1 mile a came to a slight downhill slope.  I got out and kicked away some snow to reveal a hard crust and ice.  I was at a wide spot, so I decided it was best to turn around and not take a risk of getting stuck.  If I started to spin and got on that ice I’d most likely be stuck.  Plus with high winds and a dead end road there was also the risk of a tree falling and blocking me in.  If I would’ve had more time I would’ve walked to the lake, but it was almost 3:30 and I figured it was best to make my way out of the woods to civilization.

My loop brought me back to the Telos Rd about 12 miles south of Chamberlain Bridge.  With the extreme cold and getting dark this is where I made the decision to change my plans and go back to Millinocket instead of Ashland.  It was actually 50 miles shorter to go home by way of Ashland, but a very long drive of 72 miles to paved roads.  Going back to Millinocket was only 32 miles to paved roads.  I think I only saw 2-3 vehicles on the 32-mile stretch.  I stopped at the Scootic In in Millinocket for supper before heading for home.

Even though it was a very cold day I still managed to take a lot of pictures even though my hands started to hurt while taking some of them.  LOL

I wasn’t the only person out in the extreme cold.  I met a few vehicles on the roads and even saw some people on snowmobiles.

There are 145 photos in Album (Note: Move mouse pointer over larger pic and click on NEXT for better viewing)