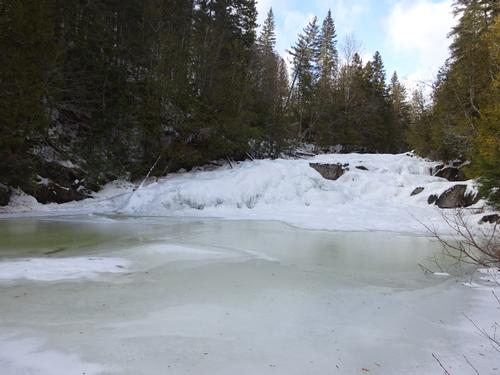 With recent snow and rain, I did not know what to expect for road conditions on this trip.  If the roads would've been a sheet of ice I would've turned around, but luckily it wasn't that bad, but still sketchy.  14 miles after leaving pavement I came to a point where the road I wanted to travel was no longer plowed.  I decided to drive through the low snow bank and continue onward.  The snow wasn't very deep, but was crusty from the recent rain.

8.5 miles of driving the unplowed road brought me to the short trail to Rocky Brook Falls.  I've never seen this waterfall during winter conditions.  It is about 0.4-mile hike to the waterfall and is easy.  I spent about 45 min. on this hike.

After the short hike I continued onward on the unplowed roads, not knowing if I would even be able to make it to my destination, which was the paved road in St. Francis.  As I got further north and higher in elevation, the snow did get deeper.  My truck would shudder going up some of the steep hills!  The hills did worry me some as if I couldn't make it up a hill I'd have to turn around, but I also had steep hills to go back up if I did turn around.  Luckily I was able to make it up all of the steep hills.  My speed on the unplowed roads was between 10 - 15 MPH.

6 miles before reaching the paved road I turned onto a road that had been plowed prior to the recent snow/rain storm.  It was icy in spots, but I proceeded slowly and made it to the paved road in St. Francis.  From there I continued to Fort Kent where I stopped for supper before heading home.

Besides taking a risk of getting stuck on unplowed roads - (I did have a shovel), I also took a risk of having a fallen tree blocking my path.  It was VERY windy and I didn't bring an ax or saw with me.  Luckily the only tree down on the road was at a wide spot that was easy to get around.

I met one vehicle while in the woods on the plowed road. I didn't see any animals, but tons of tracks from moose and deer.

This was a fairly long road trip, going 170 miles total, with 46 miles of that on woods roads.

There are 54 photos in Album (Note: Move mouse pointer over larger pic and click on NEXT for better viewing)