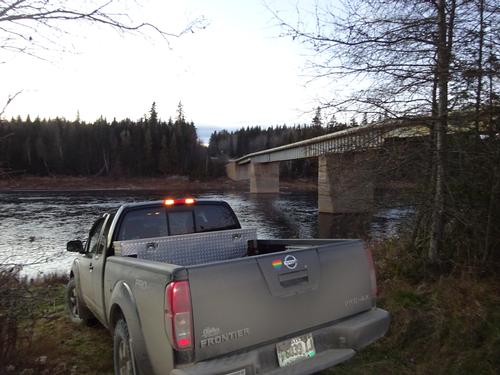 I have vacation days that need to be used up by the end of the year, and management assigned this day to me.  It was actually a good day to have off, unlike the day before. LOL

At the last minute I decided to take a ride out in the North Maine Woods to the Allagash Wilderness Waterway and the St. John River.

This was mainly a road trip, but I did hike to a campsite on Round Pond in The Allagash.  The hike took longer than I planned.  I hadn't been to that spot since Nov. 2008.  At that time there was a fairly obvious trail to the campsite from the road.  I had assumed the trail would still be obvious, but it wasn't.

The trail from the overgrown road passes the outhouse.  The trail is overgrown, but I was able to follow it the short distance.  There was some very old broken flagging tied to a bush, but I didn't notice it on the hike in. :(

What should've been a 10-12 min. hike to the campsite took 45 min.  If I would've researched this more before leaving home I would've known the distance I needed to hike to get to the trail to the campsite and estimate my time based on that.  Oh well, I still got there.

By the time I reached the St. John River the sun had already set.  I would've liked to had gone further, but felt it was pointless since it was getting dark.  I turned around and headed back east to civilization.

Even though this was a last minute trip, it was still fairly long distance.  I drove a total of 227 miles on the trip, with 148 miles of that on unpaved woods roads.

For being a weekday, there really wasn't much road traffic in the woods.

There are 43 photos in Album (Note: Move mouse pointer over larger pic and click on NEXT for better viewing)